U.S. wheat planted area has trended down for many years 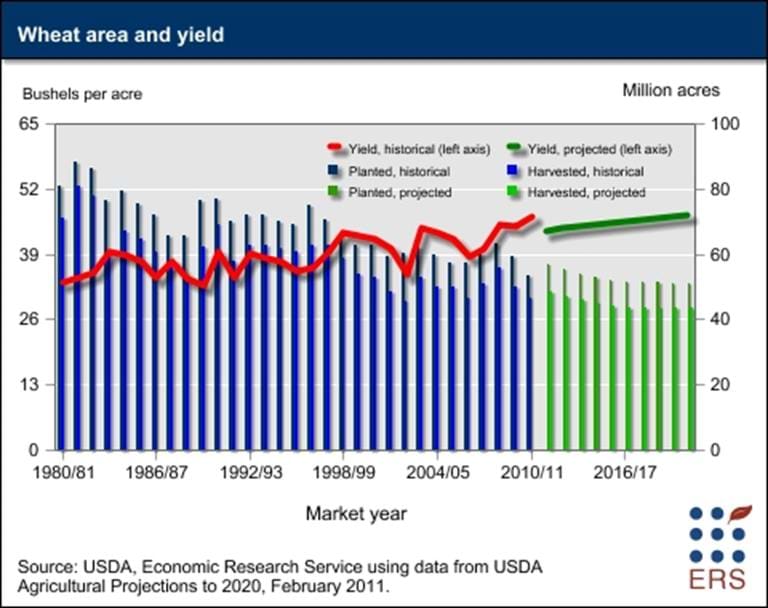 The United States is a major wheat-producing country, with output exceeded only by China, the European Union (EU-27), and India. Nationally, wheat ranks third among field crops in both planted acreage and value of production, behind corn and soybeans. Nonetheless, while varying widely during the past half-century, U.S. wheat area has been trending downward after peaking in the early 1980s, and is expected to do so for the foreseeable future. Past annual fluctuations in wheat area can be explained by changes in the Government's farm program, declining consumer demand for wheat products, and more recently, the relative profitability of growing competing crops. Several long-term factors play important roles in the projected downward trend of the U.S. wheat crop area for the remainder of this decade. The profitability of growing wheat relative to other crops, particularly corn and soybeans, is expected to continue declining. Two factors facilitating the planting of alternative crops, such as corn and sorghum, are the increased use of reduced-tillage and continuing genetic improvements, both of which improve yields of these alternative crops. Furthermore, wheat production in the Ukraine, Russia, and Kazakhstan is expected to continue increasing, competing with the U.S. in global markets. This graphic is from the Wheat briefing room, April 2011.