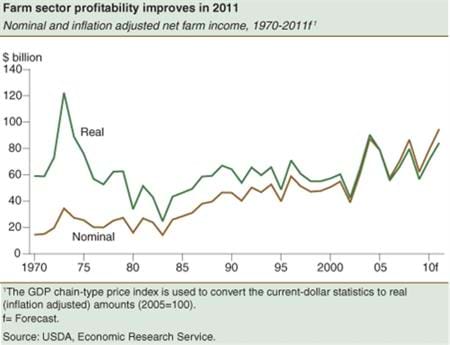 Net farm income (a measure of profitability that accounts for inventories and capital consumption), is forecast to reach $94.7 billion in 2011, up nearly 20 percent from the 2010 forecast. The 2011 forecast is the second highest inflation-adjusted value for net farm income in the past 36 years (income in 2004 is the highest on record for that period). From 1976 forward, the top five years for inflation-adjusted net farm income have occurred since 2004, attesting to the recent profitability of farming. This chart appeared in the March 2011 edition of Amber Waves magazine.