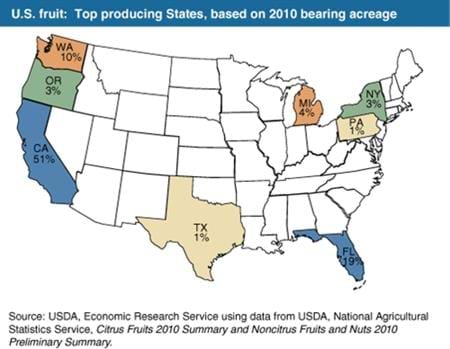 California accounts for about half of U.S. bearing fruit acreage, Florida almost one-fourth, and Washington around one-tenth. Michigan, New York, Oregon, Pennsylvania, and Texas are also important fruit-producing States and together account for over one-tenth of the Nation's fruit acreage. California is the largest producer of grapes, strawberries, peaches, nectarines, kiwifruit, prunes, and plums; is a major producer of a variety of other noncitrus fruit like apples, pears, and sweet cherries; and ranks second in citrus production. California's fruit-friendly climate gives it an advantage over other fruit-producing States. Florida's primary fruit crop is citrus. Washington is the largest producer of apples and sweet cherries and an important producer of grapes and pears. This map appeared in the June 2011 issue of Amber Waves magazine.