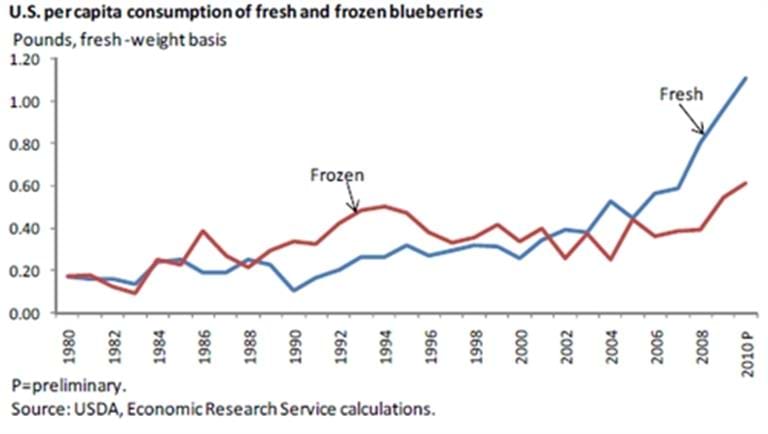 Demand for blueberries in the United States has grown, with fresh and frozen per capita consumption both increasing over the last three decades. This growth was spurred by heightened consumer interest in healthy diets and the proactive efforts of the U.S. blueberry industry in raising consumer awareness of the health benefits derived from blueberry consumption. Throughout the 1990s to 2001, Americans were eating more frozen blueberries than fresh. Beginning in 2002, per capita fresh blueberry consumption was estimated to have exceeded those for frozen (on a fresh-weight basis). Fresh blueberry consumption reached a record 1.11 pounds per person in 2010, and at an estimated 0.60 pound, per capita consumption of frozen blueberries was also at an all-time high in 2010. Blueberries come in second in terms of crop size, trailing strawberries. Average 2008-10 strawberry production was 2.72 billion pounds while blueberry production was 462.5 million pounds. This chart was published in the ERS Outlook Newsletter, Fruit and Tree Nuts, FTS-346, March 30, 2011, as a special commodity highlight on blueberries.