History of the Conservation Reserve Program 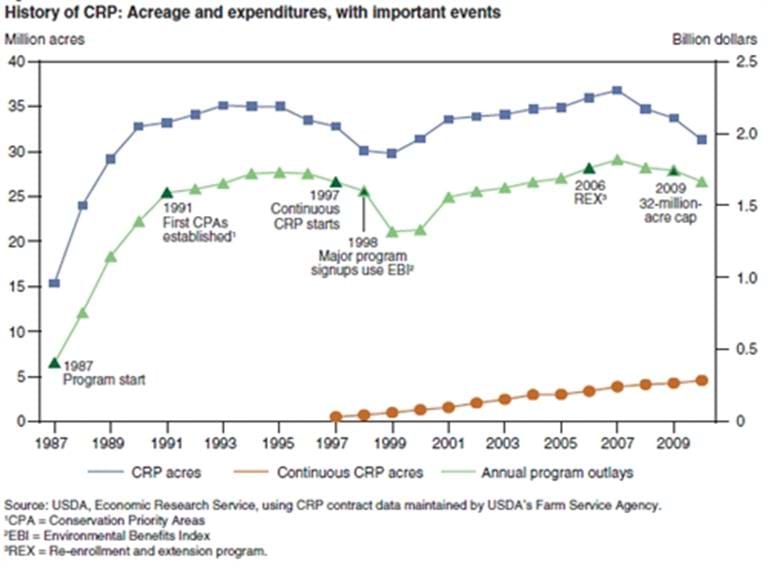 USDA's Conservation Reserve Program (CRP) was established in 1985 and by 1986 began enrolling highly erodible cropland using contracts that retired land from crop production for 10-15 years. Enrollment grew quickly, reaching 33 million acres by 1990. After the initial contracts were awarded, program goals were expanded to include water quality and wildlife habitat improvements in addition to reduced soil erosion. To capture these multiple objectives, an Environmental Benefits Index (EBI) was adopted in the 1990s to rank competing offers for CRP's periodic "general signups," but didn't begin to have a measurable impact on enrollment until 1998. At about the same time, a "continuous CRP signup" began enrolling parcels of land with high environmental benefits outside of the EBI ranking process. Enrollment in continuous programs has steadily increased, as has their role in expanding CRP benefits. Between 1990 and 2008, CRP enrollment fluctuated around 33 million acres. As of February 2010, the program enrolled 31.2 million acres. This includes about 4.5 million acres of continuous signup acres. This chart appeared in the ERS publication, The Influence of Rising Commodity Prices on the Conservation Reserve Program, ERR-110, February 2011.