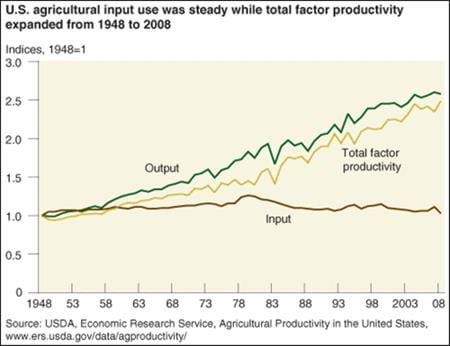 ERS data show that total farm output grew by 158 percent from 1948 to 2008, but total inputs used in agriculture remained largely unchanged. However, the composition of the input mix changed dramatically. While labor use declined by 78 percent and land use by 28 percent over those 60 years, chemical use grew fivefold from 1948 to 1980 before leveling off. Nevertheless, total factor productivity growth in U.S. agriculture over the period has been steady, at 1.52 percent per year, a rate exceeding that of a majority of other U.S. industries and of most other nations' agricultural sectors. This chart appeared in the September 2010 issue of Amber Waves magazine. It is based on the ERS data series, Agricultural Productivity in the United States.