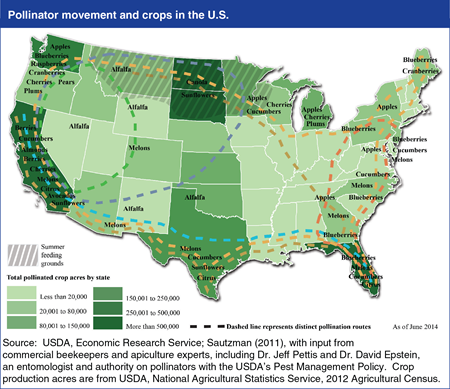 The successful cultivation of many U.S. specialty and orchards crops (including almonds, sunflowers, canola, grapes, and apples) is dependent upon commercial insect pollination. The European honey bee is largely preferred over other pollinators due to their relative ease of transport and management. Migration routes often include a stop in California to pollinate almonds in early spring. An estimated 60-75 percent of U.S. commercial hives are employed for the State’s almond bloom, which draws hives from as far away as Florida and Texas. Migratory paths diverge after the almond bloom; some beekeepers remain in California while others move north to service mainly orchard and berry crops, and others depart for southern and eastern States to pollinate a variety of specialty field crops. During the pollination season, an estimated 65-80 percent of commercial hives spend part of the summer foraging in the northern Great Plains. At the end of the summer, many operations return their hives to overwintering sites in southern States. Find this map and further discussion on U.S. pollination markets in Fruit and Tree Nut Outlook.