Ahead of Thanksgiving, August stocks of frozen whole hen turkeys up 12 percent from 2021 despite avian flu production woes 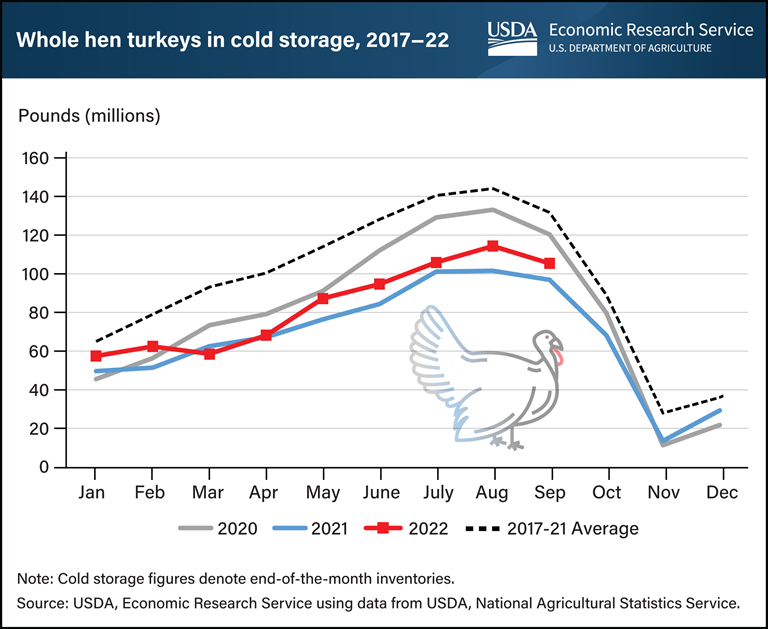 U.S. residents gobble up a lot of turkey each year at Thanksgiving. In anticipation of the holiday, producers raise turkeys and place inventories into cold storage throughout the year, with inventories often reaching peak levels in August. August 2022 storage data indicated that producers prioritized building up supplies of whole hens in time for Thanksgiving despite an outbreak of avian flu in 2022 that set back overall turkey production relative to the previous year. While production of turkey for meat in 2022 was forecast in November to be 7 percent lower than in 2021, total turkey meat in cold storage at the end of August 2022 was 1 percent higher than the same time last year. At the same time, August cold stocks of whole hens, the birds typically served for Thanksgiving dinner, were more than 12 percent higher than the same time last year at 114.4 million pounds, but below the 5-year average. August also marks the latest date by which a turkey chick can mature in time for Thanksgiving. August placements of turkey chicks were 2 percent above the 5-year average, indicating producers were working to make up for lost production earlier in the year. As is typical, September stocks were lower than August’s, falling to 105.4 million pounds but remained nearly 9 percent higher than in September 2021. This chart first appeared in USDA, Economic Research Service’s Livestock, Dairy, and Poultry Outlook: October 2022.