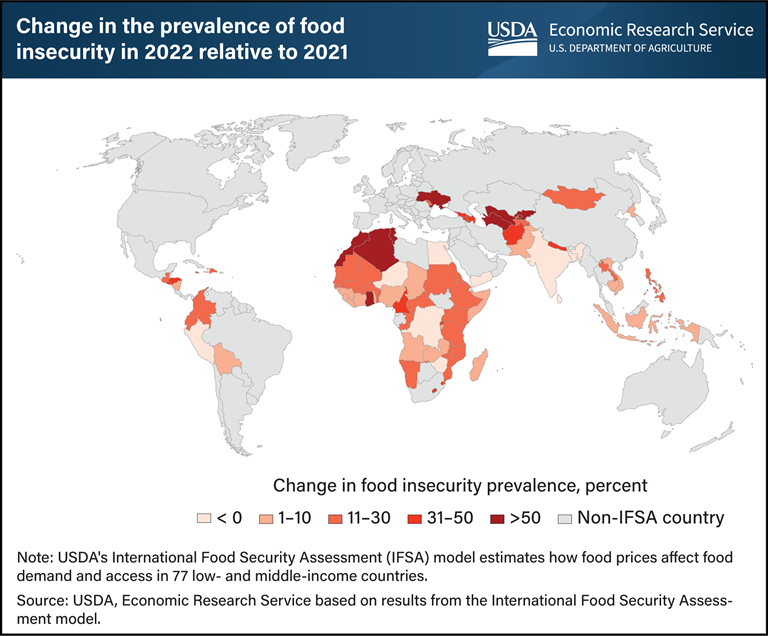 Access to food by the world’s most vulnerable households becomes constrained when food commodity prices are high, especially when the foods they purchase are sourced through international trade. USDA’s International Food Security Assessment (IFSA) model estimates how food prices and incomes affect food demand and access in 77 low- and middle-income countries. Food security is then evaluated by estimating the population unable to access sufficient calories to sustain a healthy, active lifestyle. Of the people in countries included in the 2022 IFSA, almost 119 million more people are estimated to be food insecure compared to 2021. That marks a nearly 10-percent year-to-year increase. The upward trend in international prices for wheat, coarse grains, and vegetable oils during the 2021/22 marketing year has been further exacerbated by Russia’s military invasion of Ukraine which reduced exports of these commodities from the Black Sea region. Domestic prices of major grains in 2022 are projected to rise in 70 of the 77 countries included in the IFSA, with the North Africa region being the most affected. North Africa, which is dependent on imports of wheat and corn, is estimated to see an increase in the prevalence of food insecurity by nearly 25 percent, relative to 2021. This chart appears in the USDA, Economic Research Service report, International Food Security Assessment, 2022-32, released September 15, 2022.