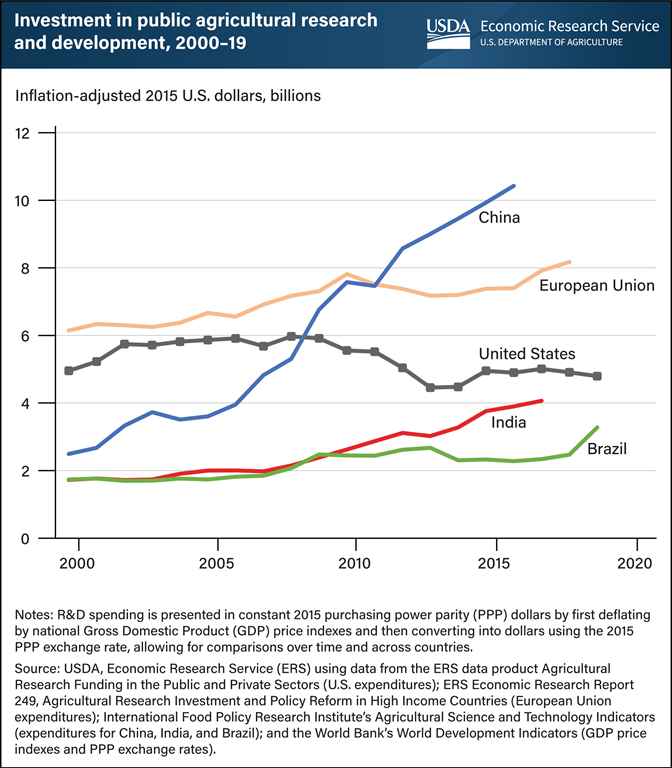 While in recent decades public agricultural research and development (R&D) funding in the United States has trended downward, several other major trading partners have increased their funding. The European Union’s expenditures have grown since 2000, as have the expenditures in India and Brazil. However, none experienced as rapid an increase as China, which became the largest funder of agricultural R&D after 2011, surpassing the European Union. By 2015, the last year for which the USDA, Economic Research Service has full data, China was spending more than $10 billion annually on agricultural R&D. That level of spending was roughly twice the U.S. expenditures in 2015 and nearly quintuple that of China’s own R&D spending in 2000. With China as a major importer of U.S. agricultural goods and Brazil a competitor to the U.S. in the global corn and soybean markets, these developments could have an impact on U.S. export competitiveness. For all countries in the figure, R&D expenditures are expressed as purchasing power parity (PPP) dollars at constant 2015 prices. This chart appears in the ERS’s Amber Waves article, “Investment in U.S. Public Agricultural Research and Development Has Fallen by a Third Over Past Two Decades, Lags Behind Major Trade Competitors,” published June 2022.