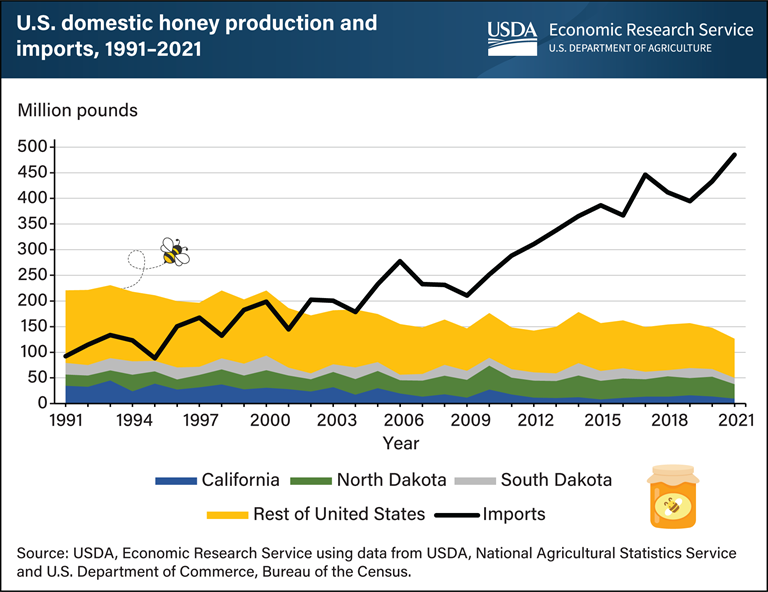 Over the last 30 years, U.S. honey production has declined by around 1.4 percent per year while honey imports have grown by 7.6 percent per year, filling the domestic supply deficit. Imports have exceeded domestic honey production since 2005 and accounted for 74 percent of total U.S. honey supplies in 2021. The top three foreign suppliers—India, Vietnam, and Argentina—supply more than 71 percent of imported honey. Honey imports have expanded with rising domestic consumption of honey and honey-sweetened products. This expansion reached an all-time high in 2021, when domestic production was at the lowest volume since 1991. In 2021, production in all three major honey-producing States—North Dakota, South Dakota, and California—were 25 percent lower than their 1991 levels while production in the rest of the States declined by almost half during the same period. With the number of honey-producing colonies mostly unchanged, the year-to-year marked decline in 2021 production was mainly due to decreased honey production per colony. Average honey production per colony fell from 55 pounds in 2020 to 47 pounds in 2021, the lowest volume since the early 1990s. The widespread drought that year in key honeybee foraging grounds reduced floral resources available to make honey, contributing to lower honey production compared to 2020. More generally, in recent years, commercial beekeepers have focused on pollination services, particularly for almonds, instead of honey production. This shift in focus has contributed to the lower per colony output trend. This chart is drawn from the USDA, Economic Research Service’s Sugar and Sweetener Outlook, June 2022.