Average age of hired farm workforce increased from 2006 to 2019 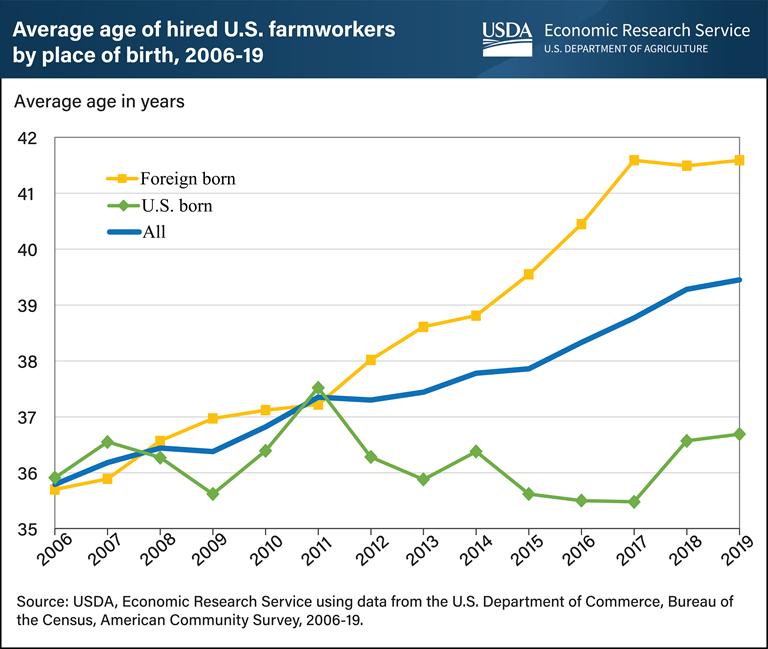 With fewer young immigrants entering the U.S. farm workforce, the average age of foreign-born hired farmworkers rose in 2019. That, in turn, pulled up the average age for the U.S. farm workforce as a whole. According to the latest data from the American Community Survey, the average age of foreign-born farmworkers increased by nearly 7 years from 2006 to 2019, from 35.7 to 41.6 years. In contrast, the average age for farmworkers born in the United States remained roughly constant over the same period. The average age of all farmworkers increased from 35.8 years in 2006 to 39.5 years in 2019. U.S. farmworkers, who make up less than 1 percent of the Nation’s workforce, are more likely to be Hispanic of Mexican origin and less likely to be citizens than are workers in occupations other than agriculture, according to the American Community Survey. This chart updates data found in the October 2020 Amber Waves data feature, “U.S. Farm Employers Respond to Labor Market Changes With Higher Wages, Use of Visa Program, and More Women Workers.”