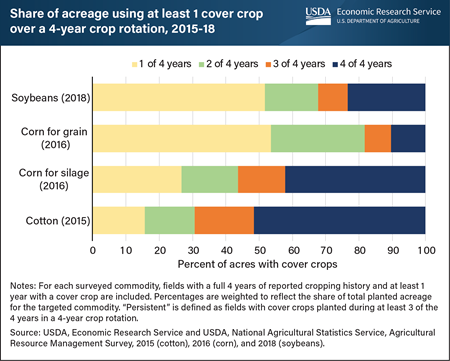 The use of cover crops on U.S. cropland increased 50 percent between 2012 and 2017, according to data in the U.S. Census of Agriculture. Cover crops—such as unharvested cereal rye, oats, winter wheat, and clover—are typically added to a crop rotation during the period between two commodity or forage crops. Persistent year-after-year adoption of cover crops (defined as 3 or 4 years of adoption within a 4-year crop rotation) can increase the accumulation of soil organic matter and provide a living, seasonal coverage of soil. Together, those two outcomes benefit farmers and the ecosystem. For example, healthier soils with consistent living cover can reduce the runoff of sediments and nutrients into waterways, increase soil moisture capacity, and sequester carbon. Among fields that adopted a cover crop in at least 1 year of the rotation, persistent cover crop use occurred on 69 percent of cotton acres (2015), 56 percent of corn-for-silage acres (2016), 19 percent of corn-for-grain acres (2016), and 32 percent of soybean acres (2018). Nationally, cover crop acreage has increased over time as conservation programs have promoted cover crop adoption through research, technical assistance, and financial assistance. Many of the fields with only 1 or 2 years of cover crops are those that started planting in the third or fourth year surveyed, suggesting that they may be new adopters. This chart appears in the Economic Research Service report Cover Crop Trends, Programs, and Practices in the United States, released February 2021, and in the March 2021 Amber Waves article, Persistent Cover Crop Adoption Varies by Primary Commodity Crop.