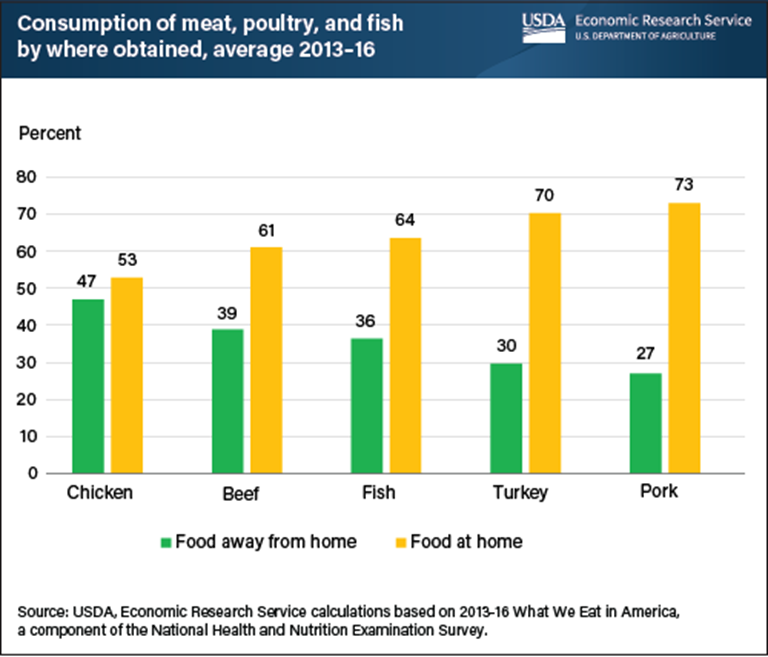 In light of shifts in eating habits due to COVID-19, USDA, Economic Research Service (ERS) researchers recently analyzed national survey data on foods eaten and where they were acquired. Data show that in the United States during 2013-16, almost half the chicken consumed was obtained at restaurants and other eating places away from home. ERS researchers looked at the most recent data available, from the National Health and Nutrition Examination Surveys conducted during 2013-16. They estimated the consumption of 63 commodities by two food sources: food at home (foods obtained at grocery stores, supercenters, and other retailers) and food away from home (foods obtained at away-from-home eating places). Among meat, poultry, and fish during 2013-16, the food most eaten at restaurants and other eating places away from home was chicken (47 percent). This was followed by beef (39 percent) and fish (36 percent). Pork had the lowest away-from-home share (27 percent), behind turkey (30 percent). Results from the ERS analysis indicate that when people in the United States consume more of their food at home because of the pandemic, consumption of specific commodities may be affected differently because people tend to eat a different mix of foods at home. This chart is based on a chart in the ERS COVID-19 Working Paper, Shares of Commodity Consumption at Home, Restaurants, Fast Food Places, Schools, and Other Away from Home Places: 2013-16, released December 2020.