Farmers Report Soil-Related Resource Concerns on About Half of Soybean, Wheat, Cotton, and Oat Fields

by Andrew B. Rosenberg and Steven Wallander

When natural resources degrade to the degree that their intended use is impaired, then a given land parcel is said to have a “resource concern.” Soil resource concerns, such as soil erosion or low organic matter, can result from geographic factors as well as past and ongoing management decisions. In the long run, soil concerns can reduce agricultural productivity and profitability. Soil concerns also can exacerbate off-farm impacts of farming and ranching, such as downstream water pollution. Using a nationally representative sample of land from the 2017 National Resources Inventory (NRI), the USDA, Natural Resources Conservation Service (NRCS) found that 18 percent of cropland acreage has water erosion, and 14 percent has a wind-erosion concern.

A recent USDA, Economic Research Service (ERS) study considered how many farmers who reported having resource concerns on fields in several commodities also received technical assistance in addressing the concerns. The study analyzed data collected from USDA’s Agricultural Resource Management Survey (ARMS) for fields growing oats and cotton in 2015, wheat (including winter, spring, and durum) in 2017, and soybeans in 2018. The analysis focused on seven resource concerns primarily related to soil and water on cropland: water-driven erosion, wind-driven erosion, soil compaction, poor drainage, low organic matter, within-field water quality concerns, and “other” concerns. These roughly correspond with 31 specific soil and water resource concerns identified by NRCS, among a total of 47 specific concerns, that form the basis of conservation planning.

Soybean Farmers Reported the Most Soil Concerns Among Selected Crops

The percentages of fields with at least one self-reported resource concern varied across crops, with farmers growing soybeans reporting concerns most frequently (about 51 percent had at least one concern). This was followed by spring wheat (about 48 percent of fields), winter wheat (44 percent), cotton (43 percent), oats (42 percent) and durum wheat (about 40 percent). Differences in the way crops are managed and differences in their production environments may account for some of the differences in the frequency of concerns across crops. Farmers may choose to grow a crop based on factors such as certain soil properties that also influence the likelihood of having resource concerns. 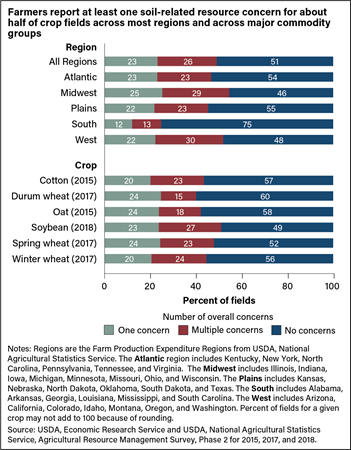 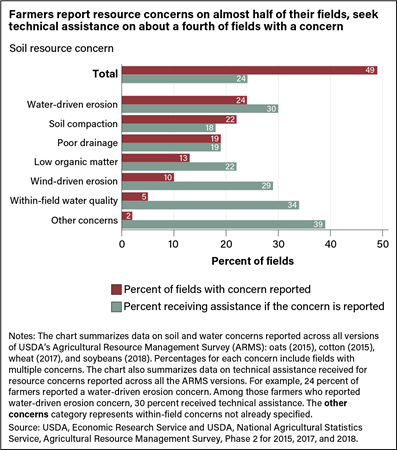 Rates of assistance could be affected by whether and how the concern affects productivity. Differences in receipt of technical assistance across concerns may also reflect differences in priority resource concerns for financial assistance programs, which rely on technical assistance as part of the process of prioritizing funding. For example, ERS’ 2019 Agricultural Resources and Environmental Indicators report found that among contracts enrolled in NRCS’ Environmental Quality Incentives Program, 19 percent of funds were obligated to soil erosion concerns, and 10 percent of funds went to soil condition concerns such as compaction and low organic matter. Finally, some combinations of concerns often may be assessed together; consequently, farmers with concerns that tend to occur together may be more likely to receive assistance. 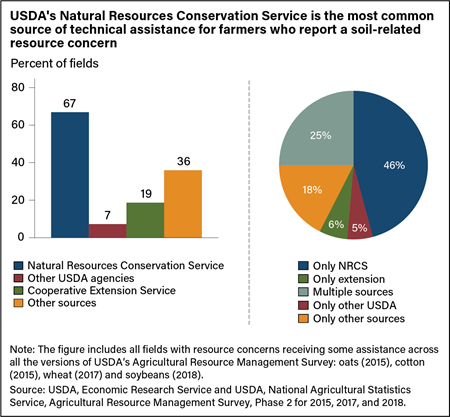