Higher aggregate incomes contributed positively to food spending in the United States during the Coronavirus (COVID-19) Recession even though total food spending dropped in 2020. The increase in disposable personal income—the money remaining after taxes—contributed greatest to spending at food-at-home (FAH) establishments such as grocery stores, supercenters, and convenience stores. To a smaller extent, income growth also boosted spending at food-away-from-home (FAFH) establishments such as restaurants, school cafeterias, sports venues, and other eating-out places. During the COVID-19 Recession (February-April 2020), on average, disposable personal income experienced one of the highest increases in the past decades at 5.7 percent year-to-year, monthly growth, and at 5.6 percent during the rest of 2020, likely driven by the stimulus packages provided by the Federal Government.

The USDA, Economic Research Service (ERS) recently analyzed food spending patterns during recessionary and non-recessionary periods to better understand the changes since the Great Recession, which took place from December 2007 to June 2009. Total food expenditures per capita, after adjusting for inflation, in the United States increased every year over the last 50 years except for 2008 and 2009 (Great Recession) and 2020 (COVID-19 Recession). Food, despite being the most basic of human needs, is still subject to spending decreases during recessions because consumers are better able to adjust how they buy food than they are for other needs such as rent. For instance, they can eat out less, hunt for bargains, clip coupons, or change their diet to cut out expensive or unnecessary items.

Using data from 1997 to 2020, the researchers compared the contributions of these four components on food spending during the Great Recession and the COVID-19 Recession.

The chart below illustrates the relative importance of each component on food-at-home and food-away-from-home spending during both recessions. Because these results capture the relative effects of the 4 components on FAH and FAFH expenditures, the sum of the 4 components is 100 when there was an increase in food spending or minus 100 when there was a decrease in food spending on average.

During the recessions, two factors contributed negatively to aggregate food-at-home spending: the propensity to spend versus save and the propensity to spend on food versus non-food. These components may reflect an inability of households to economize in other parts of the household budget, such as rent. However, during the COVID-19 Recession, this decrease in FAH spending was counteracted by gains in disposable personal income and the shift away from FAFH to FAH, resulting in an overall increase in FAH spending.

Like FAH, two factors are contributing to decreases in aggregate FAFH spending during recession periods: the propensity to spend and the propensity to spend on food. Though changes in disposable personal income partially counterbalanced this decrease during the COVID-19 Recession, aggregate FAFH was negatively affected by the shift to FAH spending, resulting in the sharpest decrease in aggregate FAFH spending in the past 2 decades. This shift reflects the restrictions on mobility and stay-at-home orders during this time. Without the higher disposable income during this time, spending could have fallen further. 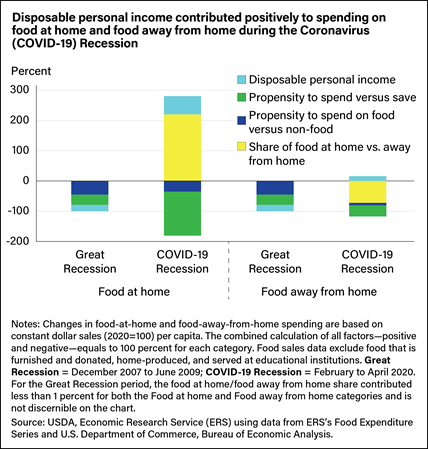