On February 9, 2022, the USDA, Animal and Plant Health Inspection Service (APHIS) confirmed highly pathogenic avian influenza (HPAI) in a commercial turkey flock in Indiana. HPAI spreads rapidly, is transmittable across different species of birds, and is often lethal to infected birds. Since 2000, outbreaks of HPAI in the United States occurred in 2004 and again in 2014–15. More animals were lost in the 2014–15 outbreak than in any other infectious animal disease event in U.S. history. These events affected poultry commerce on a global scale, decimating international demand for U.S. poultry products and reducing incomes of affected U.S. producers as well as producers whose flocks did not contract HPAI. Government efforts to mitigate the disease were effective but costly.

Based on recommendations provided by the World Organization for Animal Health (known by its previous acronym OIE), importers of U.S. poultry products responded to the 2004 and 2014–15 outbreaks by imposing embargoes and other trade restrictions. Some importers required U.S. poultry products to be heat-treated. These measures restricted access to international markets for all U.S. poultry products and led to declines in domestic prices, even in regions where HPAI was not contracted.

Researchers at USDA and Oklahoma State University studied the impact of the embargoes and trade restrictions during these past outbreaks to help producers and policymakers understand how markets respond to small and large outbreaks. They determined that changes occurred at or near the end of the disease outbreaks and persisted for several months afterward. These findings can give a sense of the potential effect of the current HPAI outbreak on the poultry industry. During both the 2004 and 2014–2015 outbreaks, the U.S. broiler (chicken) industry lost less than a fraction of 1 percent of the broiler flock. Because of this limited loss in the supply of chicken meat, researchers were able to isolate and estimate the effect that reduced international demand had on prices. They were also able to study the timing and duration of those price impacts.

In 2004, exports decreased more than 20 percent. That amounts to about 200,000 tons during the period that OIE guidelines recommended restrictions or embargoes on U.S. broiler meat. During this time, U.S. prices for chicken meat rose slightly. The slight rise was probably because the U.S. outbreak was relatively brief and other countries also reported outbreaks of HPAI. Also, consumers did not place a significant value on fresh (not frozen) chicken meat, which allowed broiler meat to be stored until after trade restrictions were lifted. Researchers established that export declines occurred immediately after the first observed case of HPAI in 2004. The left panel in the chart below illustrates the relatively brief market response to the 2004 outbreak, which receded quickly.

In 2015, smaller percentage declines in exports occurred compared with 2004 but lasted twice as long—10 months instead of 5. The most severe declines were observed near the end of the outbreak and in the following months, probably because of the spike in HPAI cases observed near the end of May and beginning of June 2015. Researchers estimated the decrease in the export volume of chicken meat at approximately 145,000 tons over the 10-month outbreak window.

For the 2014–15 outbreak, researchers looked at two possible periods when HPAI impacted broiler markets. The first period was calculated when OIE guidelines were imposed at the first confirmed case of HPAI among commercial poultry in January 2015. This lasted until October, about 4 months after the last observed case in June. That period is shown with the solid lines in the right panel below. Researchers determined the second period, indicated in the chart by dotted lines, occurred during the largest declines in exports and prices in the broiler market. That occurred between July and November 2015 and lasted about 5 months.

With these time windows in mind, the research team estimated broiler producers’ losses in 2015 at either $332 million using the OIE guidelines period or at $472 million when considering the period reflecting the largest changes in the broiler market. Not only were substantial price effects observed from lost access to international markets, but their effects also were compounded by the direct losses from lost birds, biosecurity costs, and disease control efforts. APHIS estimated these losses at $879 million for the 2014–15 outbreak. Producer losses from HPAI in 2004 were not estimated in this study. 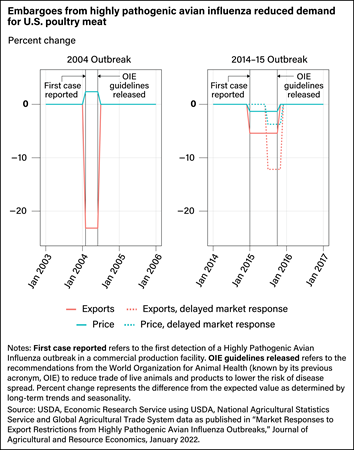