The most common component in formal drought plans is a set of protocols for how water delivery or pumping restrictions, often referred to as curtailments, would be implemented. Between 68 and 80 percent of irrigation organizations, depending on their type and size, include details about delivery or pumping restrictions in their formal plans. Additional questions in the SIO revealed that organizations tended to use similar approaches for managing water curtailments regardless of whether or not they had a drought plan, which suggests that drought plans may be more of a tool for committing to certain drought response strategies in advance rather than a means for changing those strategies.

In some cases, organizations use special pricing that increases water delivery charges or pumping charges during a drought. Higher water prices during the drought season incentivize farmers to reduce water use while helping organizations recover a share of revenue losses caused by reduced deliveries and/or the purchase of additional water supplies. About one-third of the plans for large delivery organizations address expected increases in the price charged for water deliveries or the intent to purchase additional water supplies in the event of drought. Only about 10 to 13 percent of other delivery organizations include drought pricing in their plans.

Some drought plans include specific provisions to increase water supply for irrigators. This can be done either by purchasing additional supplies during a drought or by increasing storage in reservoirs or aquifers during nondrought years as a buffer against supply shortfalls in drought years (known as water banking). About 30 percent of large organizations’ plans indicate intent to increase water supply during drought years, compared with only about 12 to 15 percent of other organizations’ plans. Between 15 and 21 percent of all plans specify an intention to use water banking. 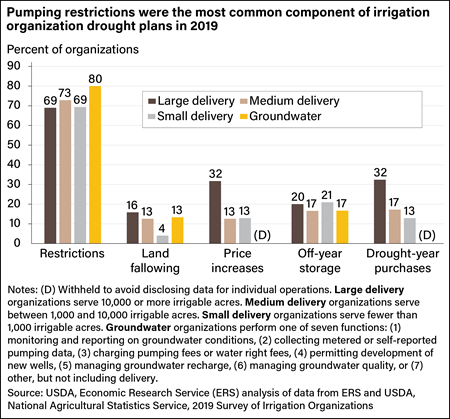