Sepsis Can Be Costly Consequence of Foodborne Illnesses

by Sandra Hoffmann and Jae-Wan Ahn

For some, foodborne illness presents itself as an uncomfortable inconvenience. For others, foodborne infections from bacteria, viruses, or parasites can result in sepsis, leading to serious and potentially deadly complications. Infections with sepsis come at a cost. In a recent study, researchers from USDA, Economic Research Service (ERS) and Colorado School of Public Health found the average hospitalization for a case of foodborne infection with sepsis was nearly twice as expensive as one without. They estimated that hospitalizations from foodborne illness with sepsis cost a total of $420 million annually from 2012 to 2015. They also found that four times as many patients with foodborne infections who developed sepsis died as those who did not develop sepsis.

Sepsis is an inflammatory response throughout the body to an infection that results in tissue damage, organ failure, and sometimes death. Sepsis may require treatment in intensive care units. According to the U.S. Agency for Health Care Research and Quality, it is one of the most expensive conditions treated in U.S. hospitals, resulting in 5.8 percent of hospital stays and 8.8 percent of hospital costs in the United States in 2017. In addition, sepsis is identified by its symptoms and not through testing, which may result in an underreporting of sepsis cases.

Using National Inpatient Sample data on U.S. hospital charges from 2012 to 2015, ERS and Colorado School of Public Health researchers identified cases by a previously validated method of using hospital billing diagnostic codes to identify sepsis cases. This method identifies cases as having had sepsis if they have diagnostic codes for both an infection and for organ failure (the official definition of sepsis). The researchers found that 29 percent of hospitalizations from foodborne infections with a specific pathogen diagnosis and 34 percent of those with no specific pathogen diagnosis developed sepsis during that time period. Hospitalizations with sepsis resulted in 12,777 deaths, 4 times the 3,194 deaths among hospitalizations from foodborne infections without sepsis. The average hospitalization with sepsis cost $20,018, compared with $11,319 for one without. Hospitalizations in which the foodborne pathogen was identified tended to be the most serious and costly, particularly those cases that developed sepsis. Among the pathogens with the largest number of sepsis cases, the cost of a hospitalization with sepsis varied from $15,077 for those with Shigella to $46,598 for those with a Toxoplasma infection.

These new cost estimates highlight the value of preventing foodborne illnesses and their complications. 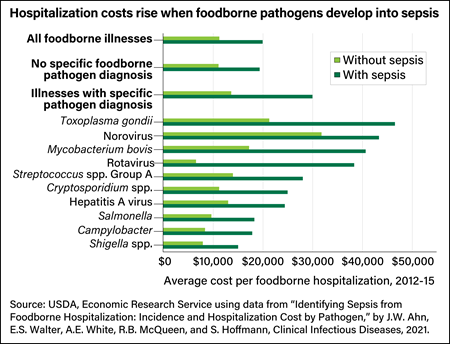