Despite extensive efforts to keep pathogens out of the U.S. food supply, outbreaks of foodborne disease still occur. They are stopped through public health investigations and timely response. State departments of public health maintain surveillance for these outbreaks and act in coordination with other States to assure vendors and manufacturers remove contaminated product from the market. Prompt actions minimize the number of illnesses caused by these events. The investigations used to identify and control outbreaks also provide the food industry with important information to improve their processes.

Researchers at USDA, Economic Research Service (ERS) and the U.S. Centers for Disease Control and Prevention (CDC), in collaboration with State public health officials in Iowa, developed a methodology that can help show the value of foodborne outbreak investigations conducted by State and Federal public health officials and subsequent food recalls. To test their model as a replicable case study, researchers used a recent Salmonella outbreak involving pre-packaged chicken salad sold by a midwestern grocery store chain. This outbreak began in early February 2018. Within 4 days of observing a spike in reported Salmonella-positive samples, Iowa public health officials identified the source of the outbreak and the grocer removed the product from its stores across eight States. Within an additional 4 days, enough information was available to issue a consumer warning to avoid the product.

The State public health authorities from Iowa and seven other States collected data on the number of cases in the multi-State outbreak. USDA, Food Safety and Inspection Service reported that the grocery chain recalled 20,630 pounds of the contaminated chicken salad and recovered 5,397 pounds (about 26 percent). Using a set of assumptions based on ERS research on food loss (the amount of food available for human consumption but not consumed), researchers determined that approximately 88.5 percent of chicken salad not recovered was consumed. Many people with foodborne illness never seek care, and some medical practitioners do not report those who do to public health authorities. CDC research on State surveillance data provides estimates of the cases reported to health officials and the proportion of Salmonella cases that are never diagnosed. Adjusting the number of reported cases for the degree to which cases go unreported provides a more accurate estimate of the actual number of cases in an outbreak. Based on information on underreporting and on food consumption, researchers calculated that approximately 2,751 cases of salmonellosis were prevented by this outbreak investigation and recall. Using ERS estimates for the cost per case of foodborne illness for salmonellosis, researchers calculated that the investigation and recall saved approximately $921,000 in medical care costs and lost time at work.

The capacity of public health departments to investigate and respond to outbreaks require public investment. The method developed through this study provides State departments of public health a way to calculate and communicate the impact of response and prevention efforts to the public and State legislatures. 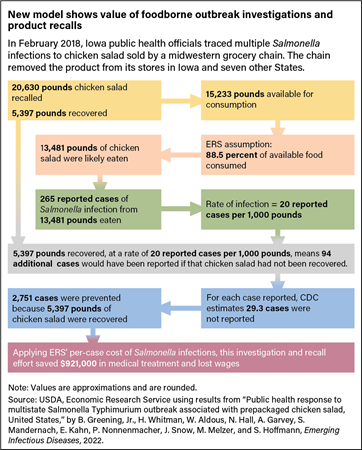