The Coronavirus (COVID-19) pandemic sparked an unprecedented shift in the way U.S. consumers spent money on food, particularly at restaurants and other food-away-from-home (FAFH) establishments. To document changes in consumer FAFH spending, researchers from the USDA, Economic Research Service (ERS) recently worked with proprietary data from a market research organization that were collected before and throughout the pandemic.

Specifically, ERS researchers used The NPD Group’s Consumer Reported Eating Share Trends (CREST), which provide national estimates of dollars spent at restaurants and other FAFH retailers. In an online survey, consumers reported how much they spent at various outlets and the total spent (including tax but excluding tips) on meals, snacks, or beverages. NPD used these individual-level surveys to generate nationally representative projections of consumer expenditures on a rolling 3-month basis to better understand overall trends. Using a rolling 3-month basis also means the timing of spending patterns lags what might have been expected in a given month.

From March to May 2020, the first 3-month period observed since the pandemic began, average total spending dropped for both restaurant categories. However, there were notable differences. Spending at quick-service restaurants dropped to about $20.1 billion, 15.4 percent lower than average spending from March to May 2019. Full-service restaurants experienced a more severe drop as State and local Governments across the country implemented social distancing mandates that limited in-person dining. During this time, spending at full-service establishments fell to $7.0 billion, almost 52 percent lower than a year earlier. 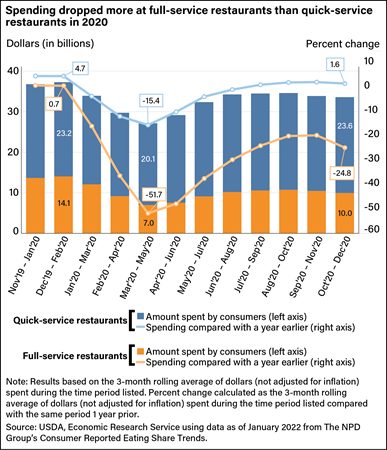