by Bryan Pratt and Steven Wallander

The USDA’s Conservation Reserve Program (CRP) is one of the largest and longest-running programs to provide payments for environmental services. Owners of environmentally sensitive cropland who enroll in the program agree to remove the land from crop production and maintain approved conservation cover for the term of the CRP contract, which can be 10 to 15 years. Most land is enrolled in CRP through the General Signup, a national competitive process that operates much like a reverse auction. Producers offer to establish a specific conservation cover practice on their fields in return for a rental rate set by USDA’s Farm Service Agency (FSA). FSA offers to reimburse half the cost of establishing conservation covers for enrolled land in addition to making annual rental payments.

The effects of enrolling land vary according to environmental sensitivity of a given field and the conservation cover agreed to in the contract. Because of these differences, every offer receives its own score using a ranking tool called the Environmental Benefits Index (EBI), which reflects differences in environmental characteristics, conservation cover quality, and cost. FSA ranks offers by EBI and accepts only those offers with an EBI greater than a threshold selected by the USDA.

Researchers for the USDA, Economic Research Service (ERS) examined data for General Signups in 2013, 2016, and 2020 to understand how CRP’s use of the EBI point system and cost-share payments for practice installation influence the choices landowners and producers make in their cover practices. Examining receipts submitted to FSA, the researchers found the cost of establishing covers for CRP varies widely across different covers and even across States, counties, and fields for any given cover.

The EBI contains six factors, with most factors containing multiple subfactors. While each subfactor is important, the researchers for this study grouped the subfactors into four major categories:

While this article does not address the Discount EBI, it is important to note that those making offers to the General Signup simultaneously consider which cover practice to establish and what rental rate to request. Consequently, the relative costs and benefits of improving one’s EBI score through these two choices—cover practice and rental rate—may be important in determining the overall offer.

Based on how EBI points are assigned, producers also choose within CP-code variants that have seed mixes with different types and numbers of grasses, forbs (a type of flowering plant), or other plants. For example, this study highlights the two main variants for introduced and native grass CP codes. The “base” variant within each CP code consists of a less diverse mix of grasses and awards fewer points. The “premium” variant contains a more diverse mix of grasses and forbs, legumes, or shrubs and awards 30 additional EBI points. If an offer is within a wildlife priority zone (WPZ), the “premium” variant results in 60 additional EBI points relative to the “base” variant, rather than just 30 additional points. In the 2021 General Signup, a new variant was introduced for existing single-species stands of introduced or native grasses; these are not shown in the EBI chart below, but both single-species variants would be awarded three points. For wildlife habitat, the “base” variant allows for introduced species, while the “native” variant requires native species for an additional 10 EBI points.

Tree practices, including softwood and hardwood tree plantings, typically earn very high scores but represent only a small share of CRP acreage. As with other CP codes, there are variants within the tree practices that earn different amounts of EBI points. In general, tree practices earn more points than grass practices, especially for the factors related to enduring benefits and carbon sequestration. Costs of Cover Establishment Vary Within and Across Practices

Producers who enroll in the CRP through General Signup can receive reimbursement for 50 percent of eligible expenses related to their chosen cover practice. While many USDA programs pay a portion of an estimated cost, CRP reimbursements are based on actual submitted receipts. These receipts offer insight into the observable costs—and variation in costs—of practice establishment across cover practice. It is worth noting that cost estimates are lower for re-enrollments, and re-enrolling contracts are less likely to submit receipts for reimbursement. The most plausible explanation for this is that these contracts are enrolling land that already meets the cover practice definition, eliminating the need to establish a new stand. 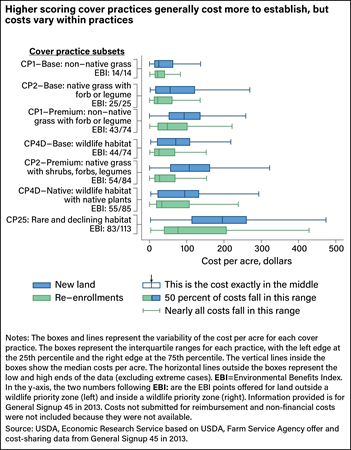 In general, the cost of practice establishment increases along with the cover EBI score of the practice. The primary exception to this pattern is the code CP4D, which involves establishing wildlife habitat. While the comparison here is based on receipts for establishment costs, CP4D has an additional cost, the development and implementation of a wildlife management plan.

The cost of establishing a practice can vary extensively, especially across States. Because invasive species and native species vary, each State FSA office establishes its own rules around seed mixes that qualify under different CP codes. In addition, seed mixes must be tailored to the climate and soil of each offer. Some climates and soil require more seed per square foot to successfully establish a cover, and with more seed per square foot, practices in these areas are more expensive per acre.

In addition to the cost of seed mix, the costs of preparing a field and planting a cover may vary across States and counties and even between fields within a State or county. The total cost for establishment includes seeds, equipment, and labor costs for installing the cover. Specific costs depend on local economic and farm-specific factors.

Less than 20 percent of offer acreage is in the lowest-point practice, CP1–Base. In other words, more than 80 percent of offered acreage is “improved” in the sense that the producer selected a cover practice to get more than the minimum EBI points. The most commonly chosen practice is CP2–Premium, which provides either 40 or 70 additional points relative to CP1–Base, depending on WPZ status. Based on the difference in average costs between the two practices ($107 per acre versus $25 per acre), the expected net cost to a participating producer, after being reimbursed for half of the establishment costs to get these additional EBI points, is $41 per acre.

The relative scarcity of CP25 (rare and declining habitat) and single-practice CP42 (pollinator habitat) may be explained in part by their costs. The median reported cost of each is $196 per acre, before cost share. CP25 and single-practice CP42 are awarded approximately 30 and 50 additional points, respectively, relative to CP2–Premium. The cost to the participant, after reimbursement, for these additional 30 or 50 points relative to CP2–Premium would be about $45 per acre. 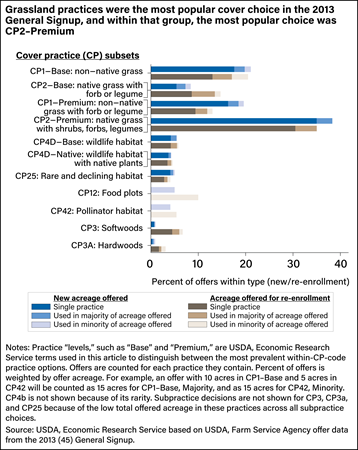 Producers respond not only to the design of the program, but also the costs of cover practices, ERS researchers found in their study. Using a simple statistical model, they compared the probability of selecting a given practice to the net cost relative to CP1–Base. The researchers found that producers are less likely to offer acreage in a cover practice as that practice becomes more expensive, even when controlling for other factors such as WPZ points or the competitiveness of an offer within a county. For example, if the cost per acre of the CP2-Premium cover practice rose $10, participation in that practice decreased by slightly more than half a percentage point.

These findings demonstrate how potential changes to the CRP could alter the incentives for producers considering an offer to General Signup. One of the key lessons is that producers respond to program incentives, including the EBI points available for specific practices and their corresponding costs, in a way that suggests that there is competitive pressure within the General Signup. Program outcomes are influenced by practice definitions and species requirements, cost share rates, EBI points, and other incentives.