Dicamba is an herbicide used to control annual and perennial broadleaf weeds. In 2016, Monsanto first commercialized genetically engineered (GE) dicamba-tolerant (DT) cotton seeds. The genetic engineering process inserts into a plant’s genome genes with beneficial traits, such as the ability to tolerate herbicide applications. DT cotton varieties were developed by inserting a bacterial gene that enables them to survive dicamba applications. Since 2016, cotton farmers have widely adopted DT cotton seeds.

Weed management is essential to ensure the quality of harvested cotton and to increase farm profit. Most U.S. cotton farmers control weeds using a combination of herbicides—such as pendimethalin, metolachlor, dicamba, 2,4-D choline, glufosinate, and glyphosate—and GE herbicide-tolerant (HT) seeds. As of 2019, GE cotton varieties resistant to glyphosate, glufosinate, 2,4-D choline, or dicamba were commercially available. Most are “stacked” with multiple HT traits, such as glyphosate and dicamba tolerance.

The adoption of dicamba-tolerant seeds is driven by many factors, such as seed costs, alternatives for controlling weeds, yield goals, and regulations that affect the use of dicamba.

USDA and various State-level Department of Agriculture data provide insight into how the effectiveness of chemical alternatives to dicamba affect adoption and how dicamba herbicide regulations vary in cotton-producing States. 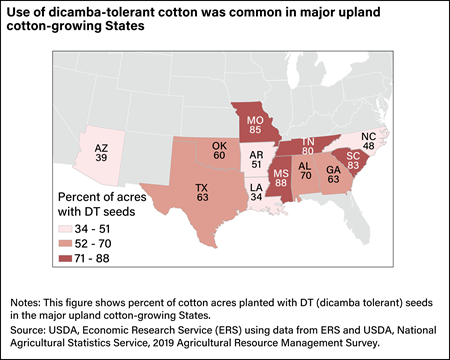 USDA’s 2019 Agricultural Resource Management Survey (ARMS) data, which covered the majority of cotton-producing states, suggest that farmers quickly adopted DT cotton seeds. From 2016 to 2019, the percent of cotton acres planted with DT seeds rose from 0 to 69 percent. The States with the most DT seed use in 2019 were Mississippi, Missouri, South Carolina, and Tennessee—where approximately 88 percent, 85 percent, 83 percent, and 80 percent of cotton acres were planted with DT varieties, respectively.

Before the commercialization of DT cotton seeds, farmers had widely adopted GE glyphosate- and glufosinate-tolerant crop varieties. As adoption rates for these HT crops increased, the use of glyphosate and glufosinate increased, particularly glyphosate. On some fields, a small number of naturally resistant weeds, from a small number of weed species, survived (or “escaped”) glyphosate applications. Over time, these weeds bred and spread, passing on their natural resistance to the next generation. By 2019, there were glyphosate-tolerant weeds in the majority of cotton-producing States, leading to a reduction in glyphosate’s effectiveness. Initially, farmers increased glyphosate use to compensate for declines in glyphosate’s effectiveness. As glyphosate resistance worsened, it became profitable for farmers to include additional herbicides, such as dicamba. 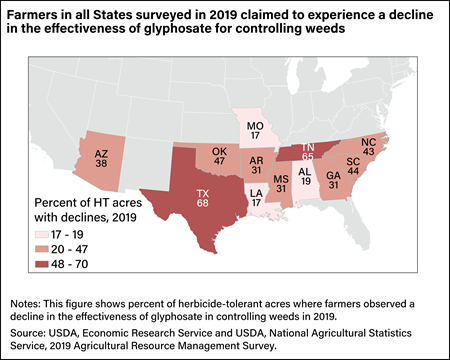 State and Federal restrictions for the use of dicamba can also influence a farmer’s decision to adopt DT seeds. When the U.S. Environmental Protection Agency (EPA) approved dicamba for post-emergent (“over the top”) use for cotton in November 2016, it included restrictions intended to reduce the risk of dicamba drifting or moving off-target. Nevertheless, there were many reports of crop damage because of off-target movement from DT cotton (and soybeans) in 2016 and 2017. EPA updated these restrictions in 2018 to further minimize the potential for off-target plant damage. In 2019, Federal restrictions included:

Different States imposed additional restrictions or extensions for dicamba application in 2019. For example, in Arkansas and Louisiana, dicamba could only be applied to cotton early in the growing season when environmental conditions reduce the risk of off-target movement. In contrast, Georgia, Oklahoma, and Texas granted Special Local Need registrations to increase farmers’ flexibility by expanding the dicamba spraying window further into the growing season from the allowed 60 days after planting. In 2020, the EPA instituted a single nationwide cutoff date of July 30. In 2021, EPA notified States that state-issued Special Local Need Registrations that adjust the cutoff date would not be approved.

Based on the data obtained from the 2019 ARMS Phase 2 Crop Production Practices, in States with earlier dicamba cutoff dates, there appeared to be less dicamba applied “over the top” during the growing season. For instance, in Arkansas and Louisiana, where cutoff dates occur early in the growing season, 16 percent and 23 percent of DT cotton acres were sprayed with dicamba after planting in 2019. By contrast, Georgia allows dicamba spraying until one week before harvest, which can occur as late as December. About 57 percent of DT cotton acres received after-planting applications of dicamba in Georgia in 2019. 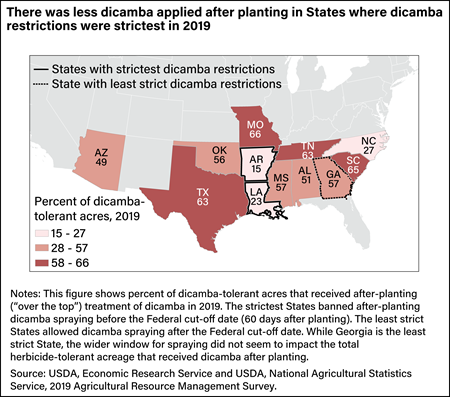