In rural areas of the country, ethnic and racial disparities persist in education, according to USDA, Economic Research Service researchers who studied data from the decennial Census and the American Community Survey. The research shows that Hispanic, Black or African American, and Native American or Alaska Native groups continue to have lower rates of educational attainment than Whites. Although the educational attainment of these ethnic and racial minority groups increased over the last two decades, they remained only half as likely as Whites to have a bachelor’s degree or higher in 2018 (the most recent year of data available). Asian Americans (not shown in the chart) were the only rural racial minority group to have a higher percentage with a bachelor’s or advanced degree (40 percent) than Whites (21 percent) in 2018. 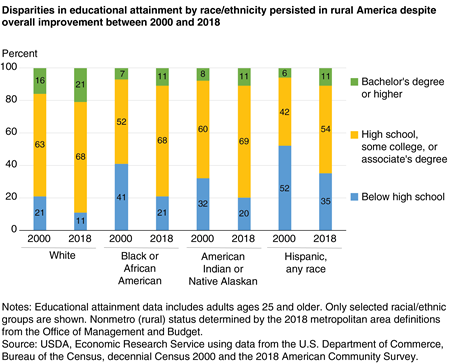