Nearly 42 million Americans (13.1 percent of the U.S. population) lived below the Federal poverty line in 2018. Just as being poor presents individuals with challenges, such as difficulty in achieving food security and housing stability, areas where a large share of the population is poor face additional socioeconomic challenges.

The higher the poverty rate and the longer it endures, the greater the likelihood that associated problems become systemic, affecting both the resident poor and non-poor. For instance, areas of extreme poverty more often lack availability of healthcare, healthy and affordable food, safe and affordable housing, quality education, and adequate protective service and transportation systems compared with more affluent localities.

In 2018, there were 664 high poverty counties in which an average of 20 percent or more of the population had lived below the Federal poverty level since 2014. The majority were rural (78.9 percent—524 counties). These high-poverty counties represented about 1 of every 4 rural counties, compared with about 1 of every 10 urban counties. Fifteen of the 664 counties were extreme poverty areas, where the poverty rate was 40 percent or greater. The extreme poverty areas were also persistent poverty counties, with poverty rates of at least 20 percent over the past 30 years.

In 2018, all of the extreme poverty counties were in rural America. These counties are not evenly distributed, but rather are geographically concentrated and disproportionately located in regions with above-average populations of racial minorities. Several extreme poverty counties, for instance, were found in South Dakota, with six counties where Native Americans made up more than 50 percent of the population. These counties were also found in Mississippi, including four counties where there has historically been a high incidence of poverty among the African-American population. 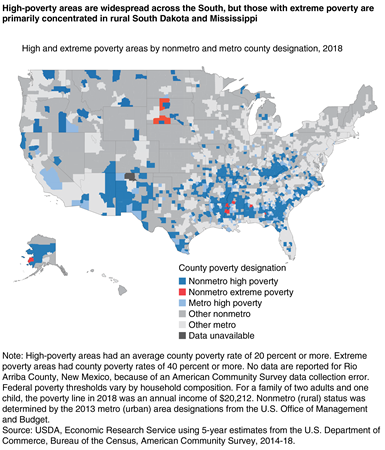