by Lisa Mancino and Christian A. Gregory

The majority of U.S. households are able to acquire enough food for everyone in the household to lead active, healthy lives. Still, roughly 12 percent of households fall short—they are food insecure. ERS has been tracking food security in the United States for over 20 years using a series of questions largely focused on whether a household can obtain sufficient quantities of food. However, the quality of foods acquired matters, too. Food insecurity is known to be associated with a host of adverse health outcomes, some of which are related to diet quality, such as diabetes and high blood cholesterol.

To look into this issue, ERS researchers used data from USDA’s National Household Food Acquisition and Purchase Survey (FoodAPS) to score the nutritional quality of a week’s worth of food acquisitions using the Healthy Eating Index-2010 (HEI-2010) for both food-secure and food-insecure households. The HEI-2010 summarizes how well a set of foods compares to recommendations from the 2010 Dietary Guidelines for Americans. The index is scored from 0 to 100, with a higher score reflecting a healthier diet. A score of 100 would signify, given the number of calories acquired, two important facts. First, the acquired foods met recommended amounts of nine components, such as whole grains, whole fruits, and vegetables. Second, the set of foods did not exceed recommended amounts of sodium, refined grains, and calories from solid fats, alcohol, and added sugars (empty calories).

The researchers limited their comparison between food-insecure and food-secure households that were low income—defined as having household incomes at or below 130 percent of the Federal Poverty Level. They also controlled for differences in individual- and household-level characteristics that may influence food choices, such as household size, age, educational attainment, and nutritional knowledge. Because low-income households get the bulk of their weekly calories from food at home—foods acquired at supermarkets, supercenters, farmers’ markets, convenience stores, and food pantries—the nutritional quality of these acquisitions has more of an impact on total diet quality compared to foods acquired away from home, such as from family and friends, in school cafeterias, and at restaurants. For that reason, the researchers estimated the association of food insecurity with nutritional quality of food-at-home and food-away-from-home acquisitions separately.

However, scores for both groups of low-income households fall far below recommendations for total diet and dietary components. Compared to the maximum component score, both food-secure and food-insecure households were closest to meeting total protein targets and had the most room to improve in meeting their recommended amounts of whole grains. 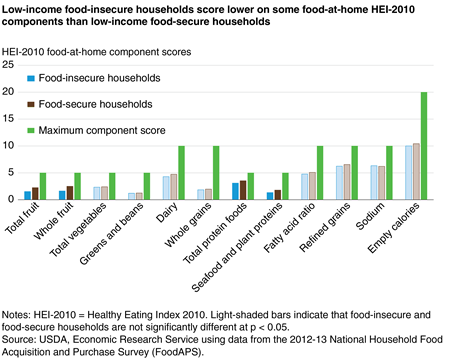