USDA data on daily shipments of romaine lettuce can be used to determine which production regions are free from contamination during a foodborne illness outbreak. These data, reported by USDA’s Agricultural Marketing Service with a 1- or 2-day lag, provide essentially real-time information on produce shipped out to retailers. An analysis conducted by the USDA’s Economic Research Service demonstrates how this information may allow the U.S. Food and Drug Administration (FDA) to rule out an entire production region as the source of contamination.

Leafy greens, including romaine lettuce, are the sixth most commonly consumed type of vegetable in the United States. From May to November, most romaine lettuce in the United States comes from California’s Central Coast region, whereas from December to April, most comes from the Yuma, Arizona region. Among the 29 outbreaks of Shiga-toxin producing Escherichia coli (STEC) O157:H7 associated with romaine lettuce between 1998 and 2018, illnesses peaked in April and October, which corresponds with the tail end of harvest season in the two main romaine growing regions. In 2017 and 2018, there were three multistate, multinational foodborne illness outbreaks of STEC associated with the consumption of romaine lettuce that occurred at the tail end of either Yuma, Arizona or California’s Central Coast production seasons. These outbreaks led to a total of 376 illnesses, 158 hospitalizations, and 7 deaths.

Researchers at USDA’s Economic Research Service (ERS) studied the timelines of these three outbreaks and their investigations, along with romaine lettuce production and shipment data in the United States. The chart of daily shipments below reveals that romaine from Yuma was not the source of the fall 2018 outbreak as no romaine was shipped from Yuma until 3 weeks after the date of first illness on October 7. Romaine shipments from Yuma dropped after FDA issued an advisory to consumers to avoid all romaine on November 20. Shipments from Yuma returned to normal after November 26, when a new FDA advisory warned consumers to avoid romaine from California’s Central Coast. In other words, USDA shipment data can help FDA in outbreak investigations regarding romaine, the most recent of which occurred in the fall of 2019, and in directing consumers how to avoid illness from them. 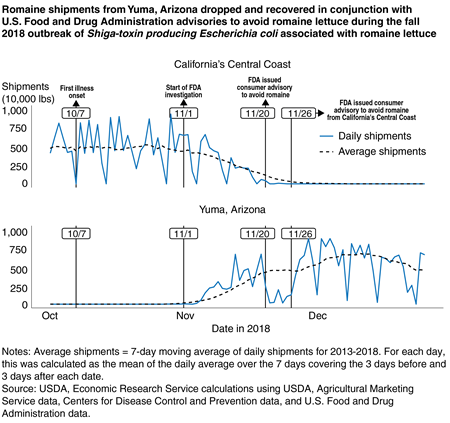