In Recent Years, Most Expiring Land in the Conservation Reserve Program Returned to Crop Production

by Daniel Bigelow and Daniel Hellerstein

The Conservation Reserve Program (CRP), administered by the USDA’s Farm Service Agency, is the largest land retirement program in the United States. Under the CRP, landowners voluntarily retire environmentally sensitive cropland for 10 to 15 years in exchange for an annual rental payment. Once a CRP contract expires, land may be offered for reenrollment, subject to the availability of signup opportunities. The acreage enrollment cap allotted to the program decreased between 2007 and 2016, reducing opportunities for reenrollment—with program acreage decreasing by 13 million acres.

What happens to the land that exits the CRP? Does most land immediately return to some form of agricultural use, such as annual crop production? Or does the land cover associated with the previously contracted CRP practice persist after land exits the program? Are certain types of CRP land covers associated with higher rates of exit or conversion to cropland?

To answer these questions, ERS researchers studied the fate (as of 2017) of 7.6 million acres of expiring CRP land between 2013 and 2016. That acreage amounted to approximately one-quarter of all CRP acres enrolled at the end of fiscal year 2012. Overall, about 36 percent of expiring CRP land (2.8 million acres) was reenrolled in the program. Of the 4.9 million acres that exited the program (i.e., were not reenrolled), about 79 percent were put into some type of crop production—with the remainder going into grass, tree, and other non-agricultural covers.

The graphic below shows the fate of all acres in CRP contracts that expired between 2013 and 2016. The left side summarizes acres that were in specific cover practices while enrolled in the CRP, while the right side summarizes where acres (as of 2017) ended up among several different land use categories.

The effects of land exiting CRP on ecosystems depend on how the land is ultimately put to use. Annual crop production was the dominant use of CRP land previously enrolled for grass, wildlife, and wetland practices, accounting for 59 to 65 percent of exiting acreage between 2013 and 2016. Land formerly enrolled for a wetland practice had the greatest share of post-CRP annual crop production (65 percent), while former tree-practice land had the lowest annual crop share (13 percent). Grass-practice land was the most likely of all practice types to transition to perennial forage production (15 percent), while land enrolled for a wildlife habitat practice was the most likely to be under post-CRP grass cover (17 percent). A large majority (77 percent) of exiting tree-practice land remained in tree cover.

The fact that such a large number of expiring acres return to crop production suggests that retaining land under the CRP helps maintain the conservation benefits that accrued from the initial retirement of environmentally sensitive cropland. 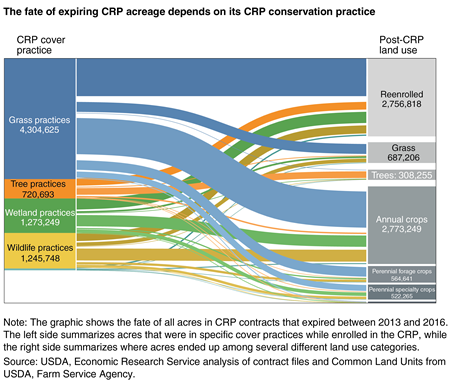 Errata: On December 4, 2020, the Amber Waves finding was revised. The share of land exiting USDA’s Conservation Reserve Program (CRP) that went into some form of crop production was corrected to 79 percent. The acreages shown in the figure were also updated to correct an undercounting of roughly 188 acres of land that exited CRP over the study period.