Thirty Years After Enactment of the Americans with Disabilities Act, Disabilities Remain a Risk Factor for Food Insecurity

Employment appears to play a role in this increased risk. Adults who report being unable to work because of disability have a high prevalence of food insecurity—struggling to put enough food on the table for all their household members. But employment alone does not explain the relationship between disabilities and food insecurity: Adults who have a disability, but do not report being unable to work because of the disability, also have a higher rate of food insecurity. Other factors may contribute to the increased prevalence, such as mobility or cognitive limitations that make it hard to acquire food or access food assistance programs. Higher health care costs and expenses for adaptive equipment or services could also reduce funds available for purchasing food. 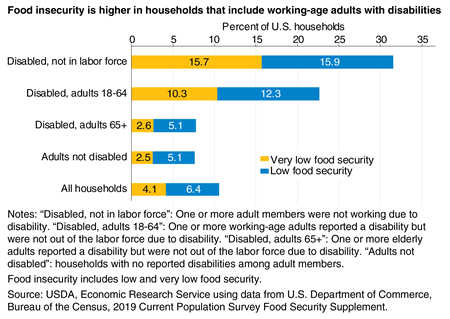