Plant-Based Products Replacing Cow’s Milk, But the Impact Is Small

According to the USDA, Economic Research Service’s (ERS) food availability data, Americans have been drinking less and less fluid cow’s milk on a per person basis since the mid-1940s. However, the rate of decline has increased recently. Between 1995 and 2009, ERS data show that the per-person U.S. supply of cow’s milk available for consumption fell at an average annual rate of 1.0 percent. From 2010 to 2017, per capita availability fell at an average rate of almost 2.5 percent a year.

Plant-based milk alternatives may play a role. Grocery store shelves and refrigerated cases offer a variety of non-dairy beverages with package labels that include the word “milk.” Industry statistics show almond-based products are the most popular. Also available are cashew, pea, soy, and rice options, among others.

ERS researchers used National Consumer Panel data from the private market research company IRI for 2013 through 2017 to investigate whether sales of plant-based products are increasing at the expense of cow’s milk. Households participating in the panel report their food purchases after each shopping occasion at a retail food store (e.g., supermarket, supercenter, or convenience store). 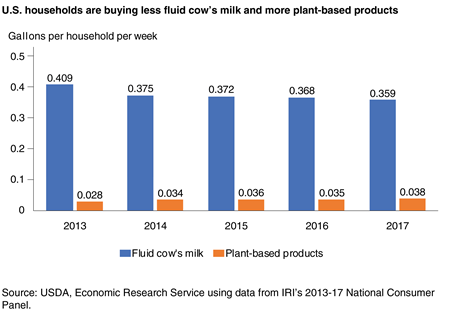