by Steven Wallander and Kelly B. Maguire

Each year, as part of the working lands conservation programs, USDA signs thousands of contracts with farmers and ranchers who agree to implement conservation practices. Within the Environmental Quality Incentives Program (EQIP), these voluntary agreements stipulate specific practices that the farmer or rancher will carry out in exchange for technical and financial assistance. Some of these contracts are simple—in 2010, about 25 percent of EQIP contracts consisted of only a single practice, such as using conservation tillage to improve soil health or installing a livestock waste management facility. Most of the contracts, though, are complex and contain multiple practices.

Overall, EQIP contracts are highly successful: about 80 percent of conservation practices signed in 2010 were completed as originally specified by 2014. The loss of the 20 percent of practices that were dropped from the contracts can be administratively burdensome and costly, so understanding why farmers and ranchers don’t carry out practices may help improve the way the program is designed.

Partially completed contracts reflect the interconnected nature of the partnership between USDA and farmers or ranchers that is central to working lands conservation programs. Given the mixture of resource concerns on a particular plot of land, the practices generally must simultaneously provide on-field benefits to the farmer or rancher and also public benefits (often off-field) that justify USDA’s expenditures on financial assistance. When these multiple benefits come from different practices on the same contract, it can lead to uneven incentives to finish the practices.

One possible explanation for partially-completed contracts is that program participants may be putting multiple practices on a contract to boost their ranking so they are more likely to obtain an EQIP contract. Once they receive a contract, these participants may then drop practices that are less effective at providing on-field benefits. While additional analysis of the data provides some evidence of this behavior, it appears to be limited in scope—likely because of the rigorous conservation planning process involved in designing contracts.

Another explanation is that dropped practices reflect changes in environmental and market conditions over the term of the contract. For example, a drought can make it more costly to implement certain practices. When this happens, practices with the lowest on-farm benefits are more likely to be dropped. While current program structure gives USDA the flexibility to modify contracts by replacing practices, it does not provide much flexibility to adjust financial assistance levels during a contract if market conditions change, except when financial assistance is based on actual practice expenditures.

Overall, ERS researchers found that most contracts were completed as planned. For the fifth of practices that were dropped, only about 40 percent occurred where the entire contract was cancelled or terminated. The fact that the majority of dropped practices were on partially completed contracts shows that farmers’ incentives to complete practices can vary within a contract. Knowing more about the relationship between the types of benefits and dropped practices may help policymakers and program managers improve the efficiency of the program. 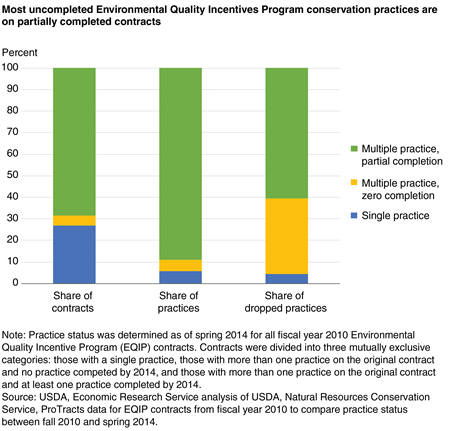