Since 2003, the American Time Use Survey (ATUS) has collected detailed information about how Americans spend their time by asking respondents to identify primary or main activities they were engaged in over a full 24-hour period. The ATUS is, however, not designed to capture time spent on the secondary activities of multi-taskers, some of which includes eating. To fill in this information gap, ERS helped to design and fund the Eating and Health Module (EHM) as a supplement to the ATUS in 2006–08 and again in 2014–16. The aim of the EHM was to collect time spent in secondary eating occasions—eating occasions that occur while individuals are doing something else that they consider to be the primary activity—such as working or watching television. EHM data show that on a typical day in 2014–16, U.S. adults spent 16.8 minutes in secondary eating, along with the 64.5 minutes spent eating and drinking as a primary activity.

To validate how well the EHM and the ATUS capture the amount of time Americans spend eating, ERS researchers compared the share of adults reporting an eating occasion each hour of the day in the 2014–16 ATUS-EHM to that in the dietary intake component of the 2013–16 National Health and Nutrition Examination Survey (NHANES). NHANES intake data are collected using USDA’s Automated Multiple-Pass Method, which employs five steps, or passes, designed to achieve complete and accurate recall of eating occasions and foods consumed, though not time spent eating.

The researchers found that in each hour of the day, the ATUS-EHM does not capture as many eating occasions as NHANES. However, when smaller and more easily forgotten eating occasions—drinks and snacks—were excluded from the NHANES data, researchers found that most of the differences between the ATUS-EHM and NHANES became much smaller or insignificant. These excluded eating occasions contained an average of 478 calories, or 22.6 percent of the average 2,117 total daily calorie intake reported in NHANES. It was also discovered that the ATUS-EHM estimate of the share of adults reporting an eating occasion was actually greater than that from NHANES during two time periods of the day: midnight and between 3 and 6 pm.

These findings suggest that although the ATUS-EHM does not capture all eating occasions, the survey does appear to capture eating occasions that contribute the most to daily calorie intake and that last the longest (i.e., snacking and drinking times are generally short). Therefore, the ATUS-EHM is likely capturing most of the time an average American adult spends eating. 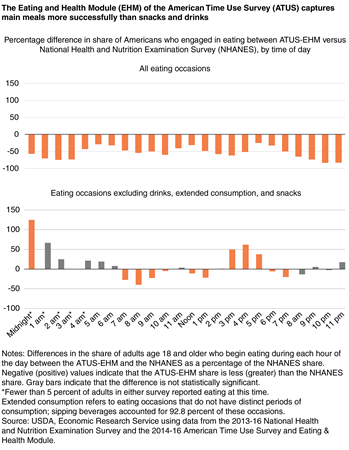 Frequency and Time of Day That Americans Eat: A Comparison of Data From the American Time Use Survey and the National Health and Nutrition Examination Survey, by Eliana Zeballos , Jessica E. Todd, and Brandon J. Restrepo, ERS, July 2019