The Use of Genetically Engineered Dicamba-Tolerant Soybean Seeds Has Increased Quickly, Benefiting Adopters but Damaging Crops in Some Fields

Weeds can cause serious problems for U.S. soybean producers. Left untreated, severe weed infestations can reduce soybean yields by more than 50 percent. Most soybean producers achieve high levels of weed control using modern synthetic herbicides. However, there are risks associated with herbicide use. For instance, herbicides that are improperly applied can move off-target, potentially damaging crops that are on or near the field where the herbicides were applied.

Glyphosate is a broad-spectrum herbicide that kills most broad-leaf weeds and grasses. Before genetically engineered glyphosate-tolerant soybeans were commercialized in 1996, glyphosate was used infrequently in soybean production. When glyphosate was used, it tended to be applied early in the growing season, before soybean seedlings had emerged from the soil. Glyphosate could be applied late in the growing season, but the use of specialized equipment (like hooded sprayers) did not eliminate the possibility of damage from off-target glyphosate movement.

As glyphosate-tolerant seed use became more common, an increasing number of farmers started using glyphosate, and only glyphosate, for weed control in soybeans. On some fields, a small number of naturally resistant weeds, from a small number of weed species, survived (or “escaped”) glyphosate applications. Over time, these weeds bred and spread, passing on their natural resistance to the next generation. By 2018, there were glyphosate-tolerant weeds in the majority of soybean-producing States. Glyphosate resistance appears to be particularly problematic in States located southwest of the Corn Belt—such as Mississippi, Kansas, Tennessee, Arkansas, and Missouri—where the most glyphosate-tolerant weed species are present. 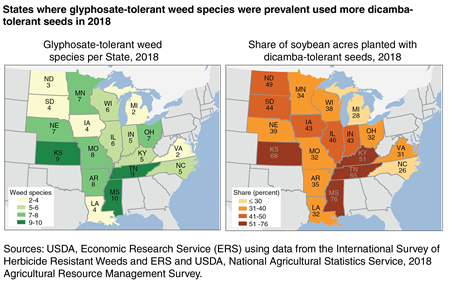 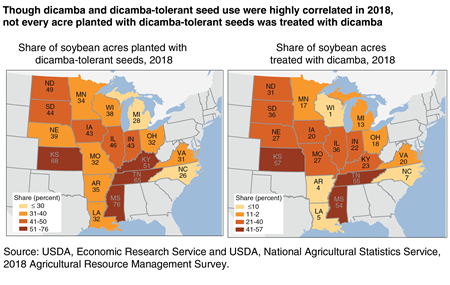 Off-target movement of dicamba can damage other plants—particularly non-dicamba-tolerant soybeans, which are highly susceptible to dicamba, even at very low doses. This movement generally occurs when droplets of dicamba “drift” at ground level during application, or when dicamba vaporizes after application, rises into the atmosphere, and floats hundreds to thousands of feet downwind. In some cases, off-target movement also occurs because spray equipment is not thoroughly cleaned following a dicamba application, and small quantities of dicamba are inadvertently mixed with other herbicides.

Farmers’ responses to USDA’s Soybean Production Practices and Costs Report for 2018 suggest that approximately 4 percent of soybean fields were damaged by off-target dicamba movement in 2018. The largest share of fields was damaged in Nebraska and Illinois, where damage from dicamba was reported on approximately 1 in every 13 fields. 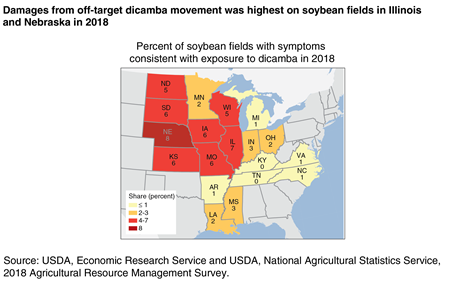 Some of the States with the least damage to soybeans were also the States where the most dicamba was sprayed. For instance, though over half of soybean fields in Mississippi were treated with dicamba, only 3 percent of soybean fields were damaged by off-target dicamba movement in 2018. Largely, this is because 73 percent of the soybeans planted in Mississippi were dicamba-tolerant. However, Federal and State-level restrictions on dicamba use may also have played a role in reducing damages.

In 2018, dicamba use was governed by Federal label rate restrictions, which mandated that:

Certain States, including Arkansas, Louisiana, Minnesota, Missouri, North Dakota, and Tennessee, imposed additional restrictions on dicamba use in 2018. In Arkansas, Louisiana, Minnesota, Missouri, and North Dakota, dicamba could only be applied to soybeans early in the growing season—when temperatures are relatively low and some of the risks associated with off-target movement are reduced. In Missouri, North Dakota, and Tennessee, dicamba use was restricted to times of day when dicamba is less likely to drift.

Other States—including Indiana, Iowa, and Mississippi—did not impose restrictions on the timing of dicamba applications, but did mandate that applicators attend State-approved training and maintain detailed recordkeeping.

There is not an easily identifiable geographic pattern between the presence of regulations and the fraction of damaged soybean acreage. Some States with relatively high rates of damage (such as Iowa and North Dakota) had State-level regulations, while others (such as Wisconsin) did not. This may be because States with high levels of damage are more likely to impose regulations. It may also be because dicamba-based products are used for weed control in crops other than soybeans, and many of these products are not subject to the State-level restrictions listed in Table 1.

Bradley, Kevin. “Ag Industry, Do We Have a Problem Yet?, Integrated Pest Management, University of Missouri, January 2017

Heap, I., The International Survey of Herbicide Resistant Weeds., September 2019