USDA’s Agricultural Resource Management Survey (ARMS) is the primary source of information on the production practices, resource use, and economic well-being of America’s farms and ranches. ARMS data include income statements, balance sheets, and financial indicators (such as debt-to asset ratios) for different types of farms by region, as well as demographics for farm operators. Jointly sponsored by ERS and the USDA, National Agricultural Statistics Service, ARMS has been conducted annually since 1996.

ERS recently released a new ARMS data dissemination tool that allows for more user interaction, includes charting capability, and has an application program interface (API) for direct queries. Brief video tutorials introduce users to the ARMS tool’s features and how to direct-query using statistical packages such as Excel, R, and Postman. Direct-query allows users to more easily retrieve and analyze ARMS data, as well as to compare it to data from other Federal agencies.

For example, the chart below compares U.S. dairy-sector income using data in the ARMS tool. The results show that dairy farm incomes generally trended up between 1996 and 2017. Gross cash income reached a record high in 2014, more than four times its 1996 level. By comparison, total cash expenses increased by 3.6 times its 1996 level. A lower increase in expenses relative to income may suggest efficiency gains. A price crash in the dairy sector resulted in farm income declines in 2015 and 2016. The number of dairy farms (those where dairy accounted for 50 percent or more of income) declined from 1996 to 2017. However, the dairy sector was able to generate more income from a fewer number of farms over that period. This suggests evidence of dairy farm consolidation. 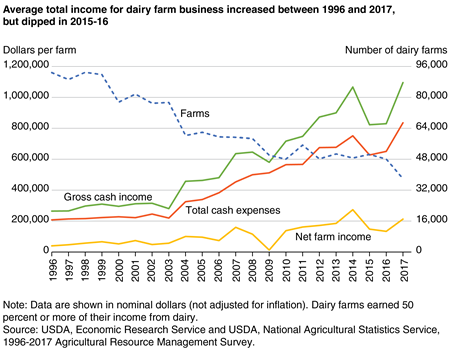 ARMS data have a variety of uses, including for official USDA estimates of farm finances, to report cost-of-production estimates mandated by Congress, and to offer staff analysis for non-profit and Government stakeholders. ERS also relies heavily on ARMS data for its research on numerous topics, such as farm management, technology adoption, resource use, and farm household well-being. In December 2019, ERS will update the ARMS tool to include 2018 data.

Errata: This article was reposted on October 7, 2019 to revise the chart’s title and its data points for 2017.