Finding: Corn and Other Feedgrains

Ethanol production has increased dramatically since the early 2000s, driven by the Renewable Fuel Standard established by Congress in 2005 and expanded in 2007. Since the 2005 corn marketing year (September-August), ethanol production increased by 288 percent from roughly 4.5 billion gallons to over 17 billion in the 2017/18 marketing year and now represents over 37 percent of U.S. corn usage.  In addition to ethanol’s significant impact on U.S. corn usage, refining ethanol produces several coproducts that are commodities in their own right.  ERS researchers analyzed USDA bioenergy data to understand the size of these coproduct markets. Dried distillers grains, or DDGs, were the most significant coproduct from ethanol production, in both size and value.

Dried distillers grains are a major coproduct from the production of ethanol from grain. DDGs are typically used as a protein-rich animal feed.  While distillers grains are sold locally in wet form, weight precludes shipping long distances.  For longer distances, DDGs are dried to about 10 percent moisture to reduce weight. Value-additive innovation continues in the ethanol coproducts space, including the growing use of pelletized DDGs.  Pellets provide a storable, easily handled form of DDGs that are compressed into small nuggets that can be bagged or shipped in bulk. DDGs substitute roughly 1-to-1 for corn grain in feed rations.  When blended into the animal feed, DDGs provide a high-protein meal that is readily available to the animals.  DDGs are most commonly used in feeding cattle, dairy cows, swine, and some poultry.

DDG production from ethanol is projected to reach roughly 38 million metric tons (MT) in 2018/19. Mirroring expanding ethanol production, DDG production has trended upward since the early 2000s, although 2018/19 marks the first year-over-year decrease. Since 2005/06, DDG production in the United States has risen by 318 percent from just over 9 million MT to 38.5 million MT in 2017/18. While supply has grown significantly, upward price trends suggest that demand has kept pace with supply. Since 2005/06, nominal average annual prices have risen by 72 percent, averaging roughly $147 dollars per ton in 2017/18. In addition to the fuel ethanol by-product, an additional 1 million metric tons of DDGs are produced from beverage distilleries.

In addition to rising domestic use, DDGs are increasingly traded internationally. U.S. exports of DDGs have substantially increased over the past decade. Only 1.2 million metric tons were exported from the United States in 2005/06, but that has risen to nearly 12 million tons in 2017/18. However, export growth has leveled off since its peak in 2013/14. The primary destinations for U.S. DDG exports are Mexico, Thailand, Vietnam, and other countries with bourgeoning livestock sectors. Projected domestic gasoline consumption is level to declining, steadying ethanol blending which has an effective upper limit of about 10 percent added to gasoline. As DDGs are a coproduct of ethanol production, ultimately production of DDGs depends either on gasoline demand or ethanol shipped overseas. 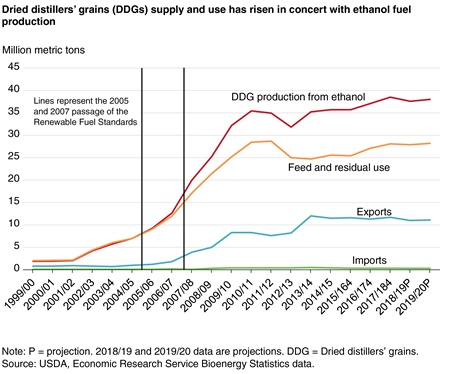