by Getachew Nigatu and James Hansen

Sub-Saharan Africa (SSA) has one of the lowest average corn yields in the world, which contributes to the region’s low level of corn production. Given the significant food insecurity experienced in SSA, the ability to expand corn production has important regional implications. Unlike most other geographic locations where yield growth rates are the major factor for increased production, increasing area harvested accounts for two-thirds of the growth in corn production in SSA.

One factor explaining the low level of corn yield in SSA is white- and yellow-corn composition. Corn production in SSA is composed of 90 percent white corn, which is predominantly used for food consumption. White-corn yields are comparatively lower than yields associated with yellow corn. Mexico is another country that produces mostly white corn. Using historical data and USDA’s 10-year projections, researchers compared yield levels and growth rates between SSA and Mexico.

The widening yield gap between the SSA region and other countries indicates that SSA has lagged behind higher yield countries in the adoption of new technologies and best agricultural practices (such as selecting high-yielding seed varieties and performing crop rotation with nitrogen-fixing legumes). However, if SSA adopts these technologies and practices, the comparatively low yield levels can present an opportunity for growth. If, for instance, SSA’s average annual corn yield increases by 3 percent per year—similar to what Mexico experienced for the last three decades—the region could annually produce an additional 10 million tons of corn in each projection year. 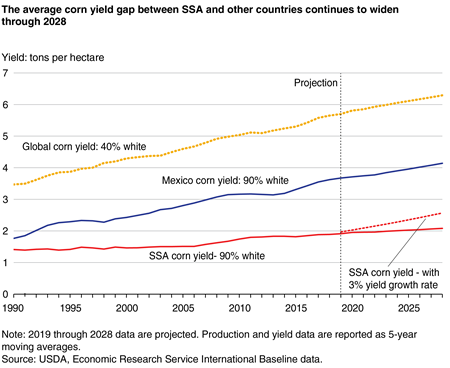