Antibiotics are a lifesaving technology widely used in human and veterinary medicine. However, the use of antibiotic drugs, by humans or animals, can also create selective evolutionary pressures that can spawn microbes and genes resistant to the drugs. Antimicrobial resistance has become a global human health concern, with widespread public and private initiatives aimed at managing resistance. Livestock agriculture is a major consumer of antibiotics and, thus, a contributor to antibiotic resistance.

In deciding what new products to develop, animal pharma must weigh these opposing pressures surrounding antibiotic use in food-animal production with other factors as follows: Human drug innovations have historically been a source of new products in animal pharma, but this role may change as the focus of human versus animal medicine changes (e.g., toward a focus on palliative-care drugs for humans with no analogous purpose in the food animal market). Furthermore, pharma companies may divert R&D spending to products specific to the companion-animal market, which has grown with the rise in pet ownership in the last decade. Lastly, some companies may choose to market generic animal drugs instead of innovating new products.

How Are Animal Drugs Approved?

Product development is a long, complicated, and costly process. Development of a new animal drug may take 7 to 10 years and cost over $50 million per new drug. A new product passes through multiple phases (discovery, development, and registration) before it comes to market, with many potential product candidates never coming to market. A company must, therefore, make decisions about where best to spend its research dollars.

Regulatory approval for animal drugs and dietary supplements in the United States is overseen by the Center for Veterinary Medicine at the U.S. Food and Drug Administration (FDA). FDA considers a drug to be any product intended for use in diagnosing, curing, mitigating, treating or preventing disease. In general, to receive drug approval, the product’s sponsor must file information on the drug’s chemistry and composition, the proposed labeling, and evidence demonstrating three things. First, the drug must be effective in doing what it proposes to do on its label. Second, the sponsor must be able to consistently manufacture the product with good practices. Finally, the drug must be safe for the animal, the environment, and people, when used as directed on the label. Further testing is required for the approval of new antibiotics.

Firms may seek to protect their product with a patent. Patents typically grant market exclusivity for a period of 20 years. Once a product loses patent protection, rivals are free to develop generic alternative versions. Generic approval requires showing a drug is “bioequivalent” to the originally approved drug, but does not require re-establishing the safety and efficacy of the drug in new clinical trials. In the United States, the ability to market generic animal drugs began in 1988, with the first generic drugs making it to market in 1992.

After many years of incurring costs, a successful product may be marketed and begin to make an economic return. However, for the initial time period after a product is released, sales are merely recouping R&D costs. It may take over a decade after approval before the product fully recovers R&D costs.

Human and animal pharma are closely linked, with similar research processes. Although animal pharma is a large global presence as evident in sales ($23.9 billion in 2014), human pharma tallies 42 times that amount (nearly $1 trillion in sales in 2014). Many drugs are originally aimed at the more lucrative human pharma market. Some drugs developed for use in animal production are “cast-offs” from products originally intended to be marketed to humans.

What Are the Trends in the Number of New Animal Drug Approvals?

However, as the chart shows, the number of new nongeneric drug approvals for animal use has trended downward since 1971, while those for human use crept upward. This contrast may be due to differences in the size of the respective industries and the basic science of products being pursued in human versus animal health. The human pharma market is much larger, so the number of drugs approved is much higher. 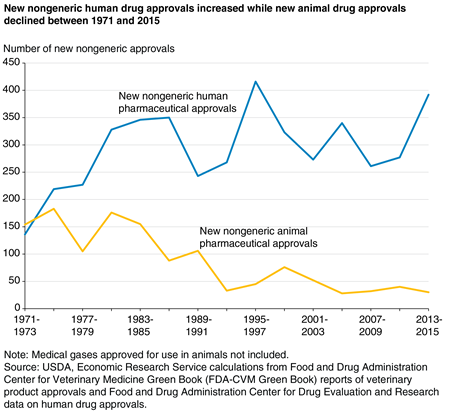 The ability to market generics represents another shift in animal drug development, with uncertain effects. Because firms are allowed to market generic products, the increased competition for specific drug types may yield greater innovation so that firms maintain a competitive advantage. Conversely, more generic competition may lead to less innovation, because generic competition may hurt firms’ ability to recapture their large initial investments. The first generic animal drug was marketed in 1992, and 52 percent of all animal product approvals were generics by 2015. Are Fewer Medically Important Antibiotics Being Approved for Food Animal Use? The FDA policies banning use of medically important antibiotics for growth promotion in food animals were originally announced in 2013, so any potential effects on drug development may not be identifiable yet. For example, products that were already in the R&D pipeline may have been carried to market regardless of the regulation’s effects on eventual sales. Thus, we still might see changes in product development due to the FDA regulations.

The U.S. and EU Animal Pharmaceutical Industries in the Age of Antibiotic Resistance, by Stacy Sneeringer, Maria Bowman, and Matthew Clancy, ERS, May 2019