Eligibility for USDA’s Supplemental Nutrition Assistance Program (SNAP) is based on a family’s level of income and assets, and the basic rules are set by the Federal Government. However, various policy options and waivers allow States to modify many of these rules. States can opt to align SNAP rules regarding vehicle ownership to those of the Temporary Assistance for Needy Families (TANF) program, Supplemental Security Income (SSI), and/or Medicaid, as long as the vehicle rules in those programs are not more restrictive than the Federal SNAP rules. Under a policy known as broad-based categorical eligibility (BBCE), States can also allow their residents to be eligible for SNAP if they participate in, or receive any type of benefits from, other assistance programs, some of which have higher or no asset limits. These households still undergo income tests to determine eligibility, but the changes in asset policies can reduce administrative costs and may encourage saving among the poor. Between 2001 and 2011, the number of States that had higher vehicle limits increased from 23 to 47, while the number that adopted broad-based categorical eligibility increased from 7 to 41.

Research indicates that vehicle ownership may help increase employment, because households with reliable transportation can access better jobs further from home. Households with some savings are also better equipped to weather temporary drops in income, or to cover unexpected expenses. ERS researchers used data from the U.S. Census Bureau’s Survey of Income and Program Participation covering the period 2001–2011 to study whether raising the vehicle and asset limits affected low-income households’ asset holdings. The study focused on households headed by adults with a high school diploma or less education, as they are likely to have low incomes and be eligible for SNAP. They excluded households with elderly members, who face different asset limits, and are more likely to be spending down their savings as they exit the labor market.

The study found no overall effects of higher vehicle limits on liquid assets, such as checking and savings accounts, or vehicle assets. The study did find, however, that removing the asset limit through BBCE increased liquid assets by as much as 20.8 percent and increased the probability of owning a vehicle by 3 percentage points. 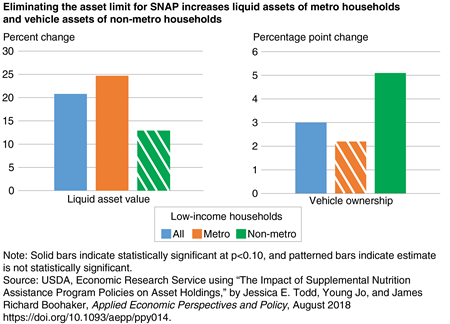