The link between labor market conditions and participation in USDA’s Supplemental Nutrition Assistance Program (SNAP) has long been of interest to policymakers and those who administer the program. Historically, the SNAP caseload has roughly tracked the national unemployment rate, rising as economic conditions deteriorate and falling as conditions improve. This relationship weakened following the 2007–09 recession, when the national unemployment rate began falling in 2011 but the number of people receiving SNAP benefits in the United States began to decline only in 2014. But such a comparison may not tell the whole story. A recent study by ERS and Census Bureau researchers suggests that local labor market conditions matter more than national- or State-level conditions.

The study found that a 1-percent increase in county employment resulted in a nearly four-fold increase in the likelihood that an adult SNAP recipient would leave the program. These results support the findings from a similar study using data from Oregon, which also found that SNAP recipients are responsive to improvements in labor market conditions in their counties or commuting areas.

Even at the county level, however, employment statistics reflect conditions in many different industries, not all of which provide employment options for SNAP recipients. In particular, the researchers found that SNAP recipients were most likely to leave the program when county-level employment in the food service and retail industries rose.

The effect of growth in county labor markets was also found to vary across race and parental status. Black SNAP participants were more likely than other race and ethnicity categories to leave the program when county-level employment increased, particularly in the retail sector. Mothers, on the other hand, were less likely to leave the program than fathers and non-parents when county employment grew. 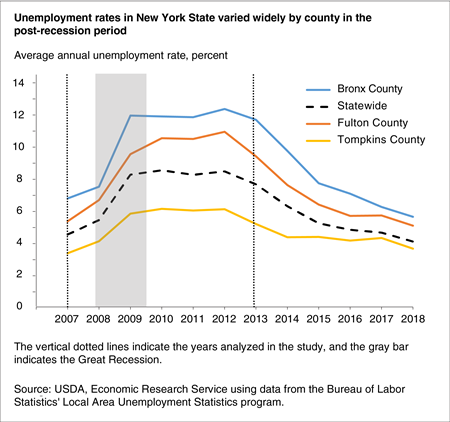