by Abigail Okrent and Annemarie Kuhns

Grocery store food prices tend to be somewhat volatile year to year. For example, retail food prices rose 4.8 percent in 2011, but just 2.5 percent in 2012. The volatility of retail food prices largely stems from their strong ties to food-production inputs with wide annual price swings, namely farm commodities and energy. From 1999 to 2018, the largest annual increase in grocery store prices was in 2008 (6.4 percent) when farm prices for grain, rice, and oilseeds soared.

However, in 2016, retail food prices actually fell 1.3 percent and fell again in 2017 (0.2 percent). Before 2016, the last time food prices had declined was 1967 (by 0.3 percent). Declining prices in 2016 and 2017 and slow price growth over the last two decades relative to earlier years have left many consumers, food industry experts, and farmers asking why. A recent ERS report investigates the underlying causes (with a particular emphasis on 2016 and 2017) and describes how multiple factors may have contributed to recent food price deflation.

Historically, grocery store prices have generally risen each year. Back-to-back years of food price deflation (in 2016 and 2017) have contributed to lower food price inflation over time. The 20-year moving average for grocery store prices, which is a measure of general long-term trends, has fallen from an average rise of 3.6 percent per year in 1999, to 3.1 percent in 2008, and to 2.0 percent in 2018.

Beginning in 2015, increased U.S. production of agricultural commodities, such as beef cattle and eggs, and lower energy prices contributed to the 2016 and 2017 decreases in grocery store prices. In addition, a strong U.S. dollar since 2014 made imported foods (i.e., many fruits and vegetables, fish, and sugar) less expensive. A strong U.S. dollar may have also curtailed other countries’ purchases of U.S. foods, thus expanding domestic supplies and dampening growth in retail food prices.

Another factor that may be contributing to deflation and low retail food inflation in recent years is competition in the food industry. In a competitive market, as farm commodity and other input prices fall, retailers have an incentive to pass along the price savings to consumers to sell higher volumes of products and gain a larger share of the market. Although it is unclear whether competition among traditional food retailers changed in 2016–17, Americans increasingly have more choices about where to purchase foods outside of these retailers, including restaurants and online delivery services. It is important to note that shocks to any single cost, such as a sustained spike in farm prices or energy costs, could raise retail food prices and change the course of the current trends. 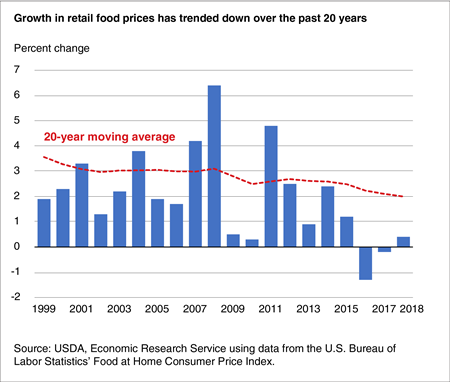 Factors Impacting Grocery Store Deflation: A Closer Look at Prices in 2016 and 2017, by Annemarie Kuhns and Abigail Okrent, ERS, April 2019