In 2018, Brazil was the world’s largest exporter of beef, providing close to 20 percent of total global beef exports, outpacing India, the second-largest exporter, by 527,000 metric tons carcass weight equivalent (CWE). Moreover, USDA projects that Brazil will continue its export growth trajectory for the next decade, reaching 2.9 million metric tons, or 23 percent of the world’s total beef exports, by 2028.

Brazil has the world’s second-largest cattle herd—232 million head—and its production is largely based on grass. Increased beef demand worldwide has stimulated increased production and productivity gains. In 2018, Brazil reached its highest level of beef production at 9.9 million metric tons. According to a September 2018 report by USDA’s Foreign Agriculture Service (FAS), programs that subsidize and improve pastures and crossbreeding are primary drivers of the overall increase of cattle production in 2019 (another significant factor is improved pasture conditions in major production regions). Between 1990 and 2018, the Brazilian cattle herd expanded by 56 percent (based on estimates from the FAS Production, Supply and Distribution database). Brazil’s beef production last peaked in 2014, when it reached 9.7 million metric tons CWE. During Brazil’s 2014-16 recession, coupled with devaluation of Brazil’s national currency, the Brazilian real, beef output continued to grow, though at a slower pace, while higher local-currency denominated prices compensated for higher production expenses.

China and Hong Kong continued to dominate as the top two destinations for Brazil’s beef exports, accounting for 44 percent of Brazil’s total beef shipments in 2018. China in 2012 lifted a Bovine Spongiform Encephalopathy (BSE)-related ban on Brazilian beef in 2012 and has since become a top importer. With an increase in the number of Brazil’s beef plants authorized to export to China, exports are expected to increase further in 2019 and over the next decade.

According to USDA’s FAS, aside from China and Hong Kong, Brazil also seeks to increase its beef exports to South Africa, Iran, Iraq, Myanmar, Malaysia, and Singapore, and is in negotiations to open its beef market to Indonesia, the most populous Muslim country in the world. Brazil is currently the largest producer of halal meat and has the potential to make inroads into Middle Eastern and other predominantly Muslim markets—especially with the region’s rising income levels coupled with higher rates of urbanization.  As of 2018, the Middle East was the third-largest importer of Brazilian beef, with a 16.1 percent market penetration, which partially offset recent decreases in Brazilian beef exports to Venezuela and Russia. 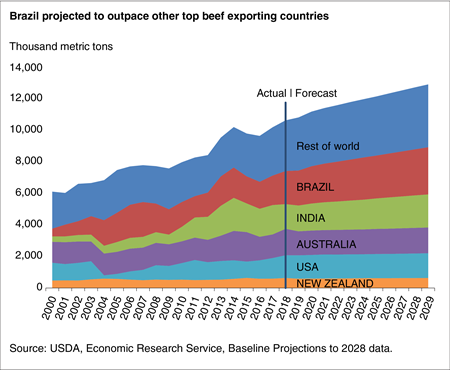