In recent years, farmers, growers, and ranchers throughout the United States have expressed concerns about the challenges of hiring an adequate number of qualified farmworkers at an economically viable wage. These challenges are particularly acute for labor-intensive sectors of U.S. agriculture. According to the 2012 Agricultural Census, contract and hired labor together accounted for 10 percent of U.S. agriculture’s total operating expenses. But this share was much higher for some agricultural sectors: 40 percent for greenhouse, nursery, and floriculture production; 39 percent for fruit and tree nut farming; and 27 percent for vegetable and melon farming.

A prominent indicator of a tighter farm labor market in the United States is the rising real (inflation-adjusted) wage for farmworkers. Between 2014 and 2018, the average hourly real wage for nonsupervisory hired farmworkers (in 2018 dollars) rose from $12.00 to $13.25, an increase of 10.4 percent. This increase in the real wage for farm labor is the fastest experienced over a 4-year period during the past two decades.

Moreover, growth in farmworker wages was faster than growth in nonfarm wages. Over the period 2014-18, the hourly real wage for all nonsupervisory production workers outside agriculture rose from $21.90 to $22.97 (in 2018 dollars), an increase of 3.5 percent. In 2018, the farm wage was 58.5 percent of the nonfarm wage, compared with 54.8 percent in 2014. Regional wage data show that over the past 4 years, farm wages rose faster than the national rate of 10.4 percent in several regions: California (15.6 percent), Mountain Region I (Idaho, Montana, and Wyoming, 13.9 percent), Pacific (Oregon and Washington, 13.9 percent), Appalachian Region I (North Carolina and Virginia, 11.7 percent), the Southern Plains (Oklahoma and Texas, 11.2 percent), and Northeast Region I (Connecticut, Massachusetts, Maine, New Hampshire, New York, Rhode Island, and Vermont, 10.7 percent).

Other indicators of a tighter farm labor market include greater employment of nonimmigrant, foreign-born farmworkers through the H-2A Temporary Agricultural Worker visa program and a decline in the number of unauthorized immigrants from Mexico living in the United States. Many U.S. growers of labor-intensive crops have long relied on farmworkers from Mexico, including some workers who are not legally authorized to be employed in the United States. 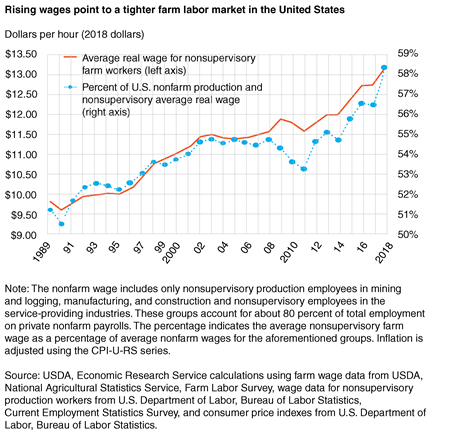