The American Recovery and Reinvestment Act of 2009 (ARRA) mandated higher monthly benefits for USDA’s Supplemental Nutrition Assistance Program (SNAP). ARRA increased SNAP benefits by a set amount for each household size. A family of four receiving the maximum monthly SNAP benefit saw its 2009 benefits increase by 13.6 percent, or about $80 per month. The new higher benefit amounts were designed to stay at the dollar amounts set by ARRA and not be adjusted for inflation until, over time, rising food prices would eventually eliminate the purchasing power of the higher benefit amounts.

However, subsequent legislation—responding to lower-than-expected food price inflation—accelerated the sunset of the ARRA benefit boost. As a result, monthly SNAP benefits decreased for the first time in the program’s history in November 2013. Maximum monthly benefits for a family of four fell by $36—a 5.4-percent decline. A recent study by ERS researchers and a colleague from Elon University looked at how SNAP participants adjusted their spending patterns and use of daily time in response to the November 2013 decline in benefits. SNAP households’ food-at-home expenditures declined by 12.6 percent from 2013 to 2014, and their transportation expenditures increased by 23.7 percent. (Food-away-from-home expenditures did not change.) 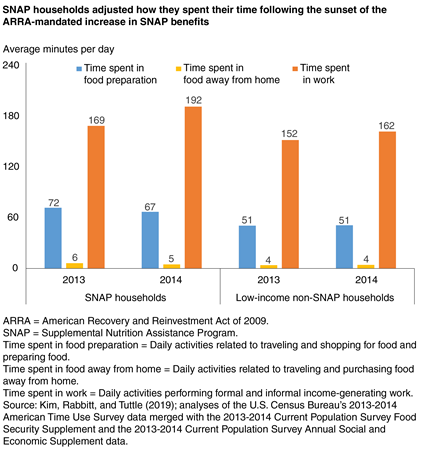 “Changes in Low-Income Households’ Spending and Time Use Patterns in Response to the 2013 Sunset of the ARRA-SNAP Benefit,” by Jiyoon Kim, Matthew P. Rabbitt, and Charlotte Tuttle, Applied Economic Perspective and Policy, doi: doi.org/10.1093/aepp/ppz007, May 2019