by Jessica E. Todd and Christian A. Gregory

USDA’s Supplemental Nutrition Assistance Program (SNAP) provides financial assistance to low-income families to purchase food at authorized food retailers. SNAP households receive their benefits in a lump-sum on an Electronic Benefit Transfer (EBT) card on a single day each month. States are allowed to stagger their benefit deliveries over the month, with a portion of SNAP recipients receiving their benefits on each distribution day. Benefit distribution schedules differ by State, and many have changed over time.

Knowing when households receive their SNAP benefits in each State over time allows researchers to study whether energy intakes, diet quality, and food-insecure conditions vary among program participants across the benefit month. For example, ERS researchers used this information along with time-use data to study whether the probability of not eating for an entire day varied for SNAP participants across the benefit month. They found that the share of SNAP recipients who reported not eating for an entire day was higher at the end of the benefit month.

The Food and Nutrition Service (FNS)—the USDA agency that administers SNAP—posts the current distribution schedule on its website, but past distribution schedules are not provided. ERS researchers recently collaborated with FNS staff to compile data about monthly SNAP distribution schedules for each of the 50 States and the District of Columbia for 1998 to 2018. This information is now provided in the SNAP Distribution Schedule Database on the ERS website and will be updated annually.

One of the reasons that SNAP benefit-distribution schedules have changed is that food retailers for whom SNAP households make up a large share of their customers experience supply bottlenecks when benefits are distributed on a single day or just a few days. That is because many SNAP households redeem a large portion of their benefits within 2 weeks of receiving them, with a majority redeemed during the first 7 days. When all benefits are distributed on a single day or over a short period of time each month, this can produce a surge in demand at grocery stores, followed by a large drop in demand, which makes it difficult for retailers to stock and staff grocery stores adequately throughout the month. Though the grocery industry lobbied to have SNAP benefits split into two payments per month, the 2008 Farm Bill formally maintained the practice of single-day distribution for each household.

At the end of 2018, the number of days on which SNAP was distributed in a month ranged from 1 to 28 days. Only seven States distributed SNAP on a single day each month. This number is down 30 percent since 1998, when 10 States had a single SNAP distribution day. This change may even be larger as the distribution schedule in six States is unknown for 1998.

The number of States (including the District of Columbia and New York City) that distribute SNAP over a period longer than 7 days has increased from 28 to 38 between 1998 and 2018, with the number distributing over 16 days or more each month increasing from 2 to 16 States. Most of the States with the longest span in their SNAP distribution schedule are in the South and Midwest. 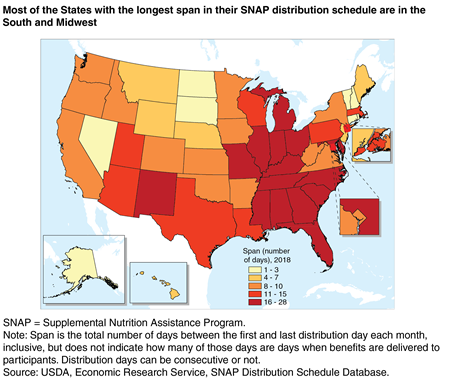 Studying the SNAP population can be challenging because participants may not always report their participation in the program and SNAP households are often under-represented in national surveys. USDA’s National Household Food Acquisition and Purchase Survey (FoodAPS) purposely oversampled SNAP households, and it is one of only two Federal national-level surveys that asks SNAP participants to report the day they last received SNAP benefits.

ERS researchers used the SNAP Distribution Schedule Database to evaluate the accuracy of the reported last SNAP receipt dates in FoodAPS and found that self-reported SNAP receipt dates were largely accurate. Over 90 percent of the dates provided by the primary respondent in current SNAP households were in line with when the States report that they distribute SNAP. This measure of accuracy was no different when only households whose participation was confirmed through a match to administrative data were examined, or across States with different distribution spans.

However, the last SNAP receipt date reported by former SNAP households (those not receiving SNAP in the past 30 days) were less likely to align with the State’s distribution schedule. It is possible for households to receive SNAP benefits outside of the regular distribution schedule, such as in the cases of emergencies or natural disasters. 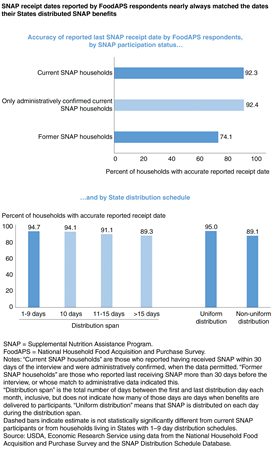