by Michael Ollinger and Joanne Guthrie

On a typical school day in 2018, almost 30 million students participated in USDA’s National School Lunch Program and 14.7 million participated in the School Breakfast Program. USDA reimburses school food authorities (SFAs) for the meals they serve to participating students. SFAs are the governing bodies responsible for the food service operations in the school district. With the exception of Alaska, Hawaii, and Puerto Rico, reimbursement rates are the same for all SFAs. If an SFA faces above average costs for food, labor, or both, this could adversely affect its ability to serve meals that meet USDA nutrition standards and are within the SFA’s budget.

The same study also examined whether regional location affects total food costs for USDA school meals. The researchers looked at similarly sized SFAs in 10 geographic regions and adjusted for the types of foods purchased to isolate the impact of regional location. They found that food costs were highest in the Northern Plains, Mountain, and Southern Plains States and lowest in the Southeast States. For example, food costs for an SFA making average size purchases in the Northern Plains States were 13.2 percent higher than food costs for an SFA making the same size purchases in the Southeast States.

Small SFAs in high-cost regions are particularly disadvantaged. For example, a small SFA in the Northern Plains making one-fourth the average size purchase would have food costs that were 20.7 percent higher than a SFA in the Southeast making an average size purchase. Higher food costs could translate into higher meal costs unless SFAs are able to offset higher food costs by using less labor or lower cost labor, purchasing less expensive foods within a food category, or limiting food variety in order to purchase larger volumes. 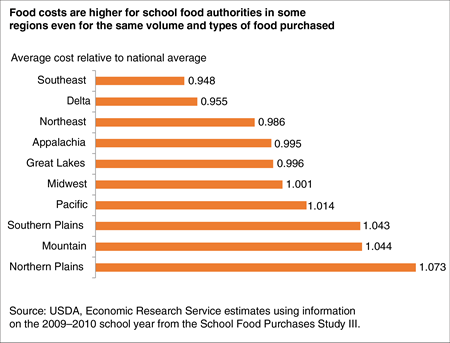 USDA School Meal Programs: How and Why the Cost of Food Purchases Varies Across Locales, by Michael Ollinger, Joanne Guthrie, and Audrey Peo, ERS, November 2018