The Tax Cuts and Jobs Act (TCJA) of 2017 made significant changes, albeit temporary ones in many cases, to the Federal income tax system. The TCJA eliminates or modifies many itemized deductions and tax credits while lowering tax rates on individual and business income. At the same time, the TCJA expands some business provisions, in particular, those that relate to capital cost recovery.

Using new 2017 data from ARMS, ERS researchers found that tax liabilities would have declined slightly for most farm sizes in 2017 relative to the 2016 estimate. Had the TCJA been in effect in 2017, the average effective tax rate for family farm households would have been more than a percentage point lower than had it been in effect in 2016, or 12.8 percent. By comparison, the actual effective tax rate in 2017 was 16.8 percent.

Had the TCJA been in effect, small family farms, those with less than $350,000 in gross cash farm income (GCFI) before expenses, would have continued to experience the lowest average effective tax rate at 10.4 percent in 2017. Only midsized farms, those between $350,000 and $1 million in GCFI, would have experienced an increase in their average tax rate had the TCJA been in effect—from 14.7 percent in 2016 to 15.8 percent in 2017. Despite this estimated increase, the rate is still below the actual tax rate (20.8 percent) midsized farms experienced in 2017.

Changes to average tax rates can also reflect changes in taxable income. Under the U.S. tax system, tax rates decline as the level of taxable income declines, and vice versa. Between 2016 and 2017, total farm household income—which includes income from farming, off-farm endeavors, and other sources—fell by 4.8 percent. Off-farm income declined 5.1 percent, driven largely by lower off-farm income on small farms. Onfarm income also declined in 2017, due to falling onfarm income on larger farms (those with gross cash farm income of $1 million or more). In contrast, onfarm income in 2017 rose for small and midsized farms by 1.3 and 5.8 percent, respectively. Overall, these shifts resulted in falling taxable incomes and declining average effective tax rates across all farm sizes except midsized farms. 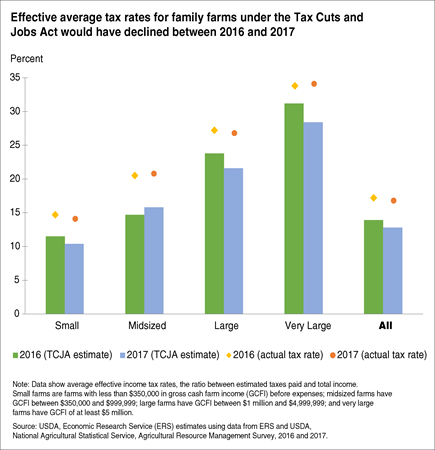