During the 2007-09 recession, USDA’s Supplemental Nutrition Assistance Program (SNAP) served as part of the safety net for millions of low-income households. In January 2010, when the national unemployment rate peaked at 10.6 percent, 39.4 million people were receiving SNAP benefits. Although the unemployment rate fell in the following years, the SNAP caseload did not decline until 2014. What explains the sluggish post-recession decline of the SNAP caseload? Put another way, how responsive are SNAP recipients to improving labor market conditions that would help them off the program?

A declining national unemployment rate may not reflect increased job opportunities for SNAP recipients if, for instance, they reside mainly in certain areas—or work in certain industries—whose economic fortunes did not recover. Labor market indicators for larger geographic areas, such as a State or national unemployment rate, can miss important differences in the pace and strength of recovery within and across States.

Another consideration when comparing the SNAP caseload to a State or the national unemployment rate is that many of the people who make up the caseload cannot work because they are too young, too old, or too infirm. Children, the elderly, and the disabled typically make up about two-thirds of the SNAP caseload. Included in the one-third of the caseload that is able to work are the parents of young children whose child care responsibilities may make it difficult to secure stable employment.

To sort out these issues, researchers at ERS and Oregon State University used participant-level SNAP records from Oregon to examine whether the likelihood of a nondisabled, or able-bodied, working-age participant leaving SNAP increases as local labor market conditions improve. The researchers found that these SNAP participants were more responsive to labor market conditions when labor markets were measured locally—on a county level or by commuting areas—as opposed to the State or national levels.

A better understanding of the adjustment in the SNAP caseload in the post-recession period can be gained by focusing on conditions in more localized labor markets and on those SNAP recipients who are likely to be responsive to labor market conditions; namely, those of working age and deemed able-bodied. Total caseload numbers do not convey the age and disability status of SNAP participants, so the ERS and Oregon State University researchers used participant-level administrative records of SNAP receipt provided by the Oregon Department of Human Services. These records include age, race, and gender of household members and whether the Oregon SNAP office deemed any members of the SNAP household to have disabilities. Few States have made this type of participant-level administrative SNAP data available to researchers.

Importantly, the Oregon administrative records also identify the SNAP household’s county of residence, making it possible to link more localized indicators of labor market conditions to data on the length of time that the SNAP household has received benefits—something else that cannot be gleaned from aggregate caseload data. For this study, two samples were drawn from SNAP participant records from January 2005 to December 2015: one of individuals who began a new SNAP spell (i.e., 2 or more months of uninterrupted receipt of SNAP benefits) in 2005 and another of those who began a new spell in 2009. For their analysis, the researchers only included recipients who were able-bodied and of working age, defined here as between age 25 and 59. Not surprisingly, those who enrolled in 2009, toward the end of the Great Recession, stayed on SNAP longer than those who enrolled in 2005. At the median, new enrollees in 2009 stayed on the program for 12 months, compared to 9 months for new enrollees in 2005.

The researchers used two definitions of a local labor market area: a county and a commuting zone. A commuting zone is a group of counties based on commuting flow data. These zones try to capture contiguous areas where people both live and work and are not necessarily confined to one State. In 2014, Oregon had 17 commuting zones that encompassed 36 Oregon counties and 12 counties in Washington, Idaho, and California. 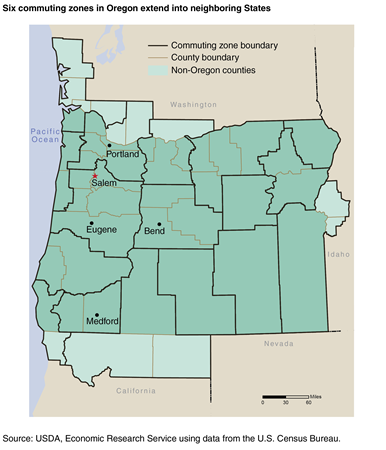 The researchers included three labor market indicators in their analysis—the unemployment rate, total number of people employed, and the number of new hires. The unemployment rate is perhaps the most familiar labor market indicator, but for local labor markets it may be more prone to mismeasurement than an indicator like total employment. New hires, on the other hand, may better reflect current employment opportunities than total employment. Between January 2005 and December 2015, the median change in quarterly employment and quarterly new hires across counties in Oregon was only about 1 and 2 percent, respectively. Similarly for commuting zones, the median change in quarterly employment and new hires was 1.3 and 2.5 percent, respectively.

However, there was significant variability in these two measures across labor market areas and time. In more than half of the quarters, both counties and commuting zones saw changes in employment of 3 percent or more and changes in new hires of 25 percent or more. Among counties in Oregon over this period, the unemployment rate ran from a low of 3 percent in Hood River County to a high of 21.7 percent in Crook County.

The probability of able-bodied, working-age people leaving SNAP was strongly linked to improvements in all three measures of labor market conditions—the unemployment rate, total employment, and new hires. A 1-percentage-point decrease in the county unemployment rate—this indicator is only available at the county level—is associated with a 3.2-percent increase in the probability of an able-bodied, working-age SNAP recipient leaving SNAP within a year. For the other two indicators, labor market conditions showed the largest effects on leaving SNAP when labor market areas were defined as commuting zones, the definition that explicitly tries to capture areas where people live and work. A 10-percent increase in total employment in an Oregon commuting zone was estimated to raise the likelihood that the average able-bodied, working-age recipient left SNAP within a year by about 5.3 percentage points, from roughly 61 percent to 66 percent. This translates into an 8.7-percent increase in the likelihood of leaving SNAP within a year.

Based on the results from this study, a 10-percent increase in local new hires in an Oregon commuting zone implies that the probability of the average able-bodied, working-age SNAP recipient leaving within a year increases by 1.5 percent. Unlike total employment, however, quarterly new hire numbers often rise or fall by more than 10 percent. Between 2005 and 2009, for example, commuting zone-level new hires fell by nearly 40 percent—and new hires in manufacturing fell 60 percent—whereas average total commuting zone-level employment rose by 1.5 percent over this period (with manufacturing employment declining 5 percent). A 40-percent change in new hires—a more typical magnitude for this measure—implies a 6-percent change in the probability of leaving SNAP within a year.

Defining the local labor market area to coincide with counties, rather than commuting zones, resulted in smaller, but still positive, estimated effects: a 10-percent increase in employment in an Oregon county raised the probability that an able-bodied, working-age SNAP recipient would finish a spell within a year by 2.5 percent. A 10-percent increase in new hires in the county increased the probability by 1 percent. 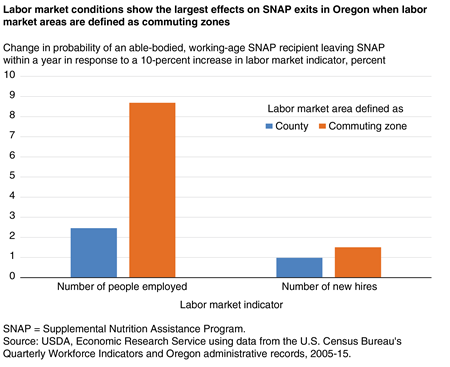 The researchers expanded their analysis by looking at labor market conditions in three industries that employ the largest proportion of current and former Oregon SNAP recipients: food service and lodging, retail trade, and manufacturing. Results for specific industries varied by the labor market indicator used.

In counties, growth in retail employment and new hires in food service and lodging were found to significantly raise the probability of able-bodied, working-age participants leaving the program.

Analysis of participant-level SNAP administrative data provides evidence that able-bodied, working-age SNAP recipients in Oregon are responsive to local labor markets and that conditions in certain industries may matter more than in others. The analysis showed little evidence that able-bodied, working-age adults who starting receiving SNAP benefits in 2009 were any less responsive to labor market conditions than similar adults entering the program in 2005.

In fact, when local labor markets are defined as commuting zones, able-bodied, working-age adults who started receiving SNAP benefits in 2009—despite having longer spells on average than their 2005 counterparts—appear to have been slightly more responsive to overall local labor market conditions. They stayed in the program longer because local labor market conditions took a long time to improve sufficiently. Their greater responsiveness could be due to the fact that new SNAP recipients in 2009 were more likely to have been in the labor force prior to receiving SNAP benefits than those who enrolled in the program in 2005. The results from this analysis do not fully explain movements in the overall caseload because the study only considered the decision to leave the program once on it, and not the decision to enroll.

A factor that may be weakening the link between SNAP participation and labor market conditions is that SNAP recipients may be moving back to work but not finding enough work, or work that pays a high enough wage, to lift them above the program’s income-eligibility threshold. According to the Oregon Department of Human Services’ Office of Forecasting, Research and Analysis, in 2016 roughly 43 percent of Oregon’s SNAP caseload were employed, which was above the national average of 31 percent. However, 70 percent were working less than full-time, and 40 percent were working less than half-time.

Relying on data from a single State raises questions about how well the results will apply to other States, or to the country as a whole. Over the study period, Oregon SNAP served a higher proportion of SNAP recipients who were working than did other States. The median income in Oregon was slightly below the national average and the poverty rate slightly above.

Oregon was among the States hardest hit by the 2007-09 recession. Its recession-era unemployment climbed as high as 12 percent, compared to the national high of 10 percent. Nearly every industry in the State experienced significant job losses; losses were especially high in the manufacturing and construction industries. In the years following the recession, parts of Oregon—particularly the Portland area—experienced a strong recovery. However, a number of rural areas in the State, especially those in the eastern half of the State, have yet to recover all, or even most, of the jobs lost during the recession.

Oregon is also notable for providing one of the more accessible social safety nets in the Nation. Starting in the early 2000s, Oregon increased its SNAP outreach efforts and launched other administrative policies that made it easier for people to enroll in SNAP. The severity of the recession in Oregon and the uneven recovery, along with Oregon’s relatively accessible and generous safety net, suggest that Oregonians who turn to SNAP might tend to remain in the program longer than the average SNAP participant. As a result, findings from Oregon might serve as conservative estimates of how responsive SNAP participants are to changing labor market conditions in their local areas.