by Katherine Ralston and Joanne Guthrie

On a typical school day in 2017, 30 million children participated in USDA’s National School Lunch Program and 14.7 million children participated in the School Breakfast Program. Eighty-five percent of School Breakfast Program participants received their breakfasts for free or at a reduced price; for school lunch participants, the share was 74 percent. Children are certified as eligible for free or reduced-price meals by either a paper application or “direct certification” through participation in other specified income-based assistance programs, such as the Supplemental Nutrition Assistance Program (SNAP) and Temporary Assistance to Needy Families.

The Community Eligibility Provision (CEP) allows schools in high-poverty areas to offer USDA school meals to all students at no charge if a large share of students are directly certified. CEP can be used by a single school, a group of schools, or the entire school district if the share of directly certified students, called the Identified Student Percentage (ISP), is at least 40 percent. Under CEP, USDA reimburses schools at the higher free-meal rates (for example, $3.23-$3.31 per lunch in 2017-18) for a portion of the meals served, and the remaining meals are reimbursed at the paid subsidy rates ($0.31-$0.39 for lunches). At ISP levels above 62.5 percent, all meals are reimbursed at the free rates.

School districts considering adopting CEP must weigh the benefits of the reduced administrative burden of not having to certify every student and collect payments from students against CEP’s potential impacts from higher participation and the reimbursement plan on costs and revenues. During the 2016-17 school year, 47 percent of eligible U.S. school districts used CEP. ERS researchers used administrative data from USDA and States on school CEP participation status and ISP levels for the 2015-16 school year to group eligible school districts into categories based on the highest school-level ISP in the district. The researchers found that the percent of districts in which at least one school used CEP was significantly higher for districts that contained at least one school in the higher ISP level categories. More than half of districts with schools in ISP ranges between 61 and 90 percent participated in CEP. In comparison, CEP was used in 13 and 26 percent of school districts where the highest ISP level was 40-50 percent and 51-60 percent, respectively. This finding suggests that districts with schools with higher needs are making greater use of CEP.

An exception to this trend is the lower CEP adoption rate of districts with schools that have ISP levels of 91-100 percent. Multivariate analysis indicated that this result was largely attributable to the fact that most districts in this ISP category were poor and very small; enrollment per district was 1,000 students or less. These districts already had a lower administrative burden because virtually all students were directly certified at that time for free or reduced-price meals. 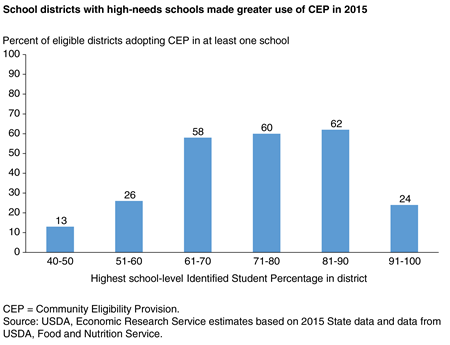