Every summer, a large area forms in the northern Gulf of Mexico where dissolved oxygen is too low for many aquatic species to survive. This “hypoxic zone” is fueled by nutrient (nitrogen and phosphorus) runoff from the Mississippi/Atchafalaya River Basin (MARB), a region containing about 70 percent percent of U.S. cropland. A 2013 simulation study by U.S. Geological Survey (USGS) researchers estimated that agriculture contributes about 60 percent of delivered nitrogen and more than 49 percent of delivered phosphorus to the Gulf. 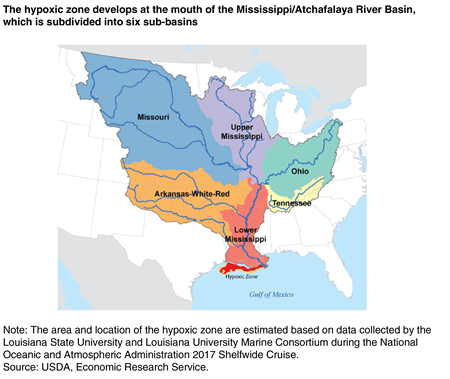 Continued expansion of the hypoxic zone may threaten the Gulf fishing industry and coastal economies. In an effort to address the issue, the Mississippi River/Gulf of Mexico Watershed Nutrient Task Force, which comprises State and Federal agencies and is led by the U.S. Environmental Protection Agency (EPA), established in its 2001 Action Plan a goal to limit the average size of the hypoxic zone to 1,931 square miles. Research suggests that such a reduction would likely require a cut in nutrient loads to the Gulf by at least 45 percent.

This goal cannot be met without substantial reductions in nutrient losses from agriculture, which occur through pathways such as runoff, subsurface flow, and erosion. Reducing nutrient losses from cropland has been a major conservation goal for USDA, EPA, and many MARB States. Conservation practices are already in place on cropland throughout the MARB. USDA’s Conservation Effects Assessment Program (CEAP) estimated that conservation practices in place from 2003 to 2006 were likely to have had substantial savings already in field-level nutrient losses in the Missouri and Arkansas-White-Red sub-basins. In contrast, the Upper and Lower Mississippi sub-basins were found to have high potential for additional reductions in nutrient loss.

Overall, according to a 2017 report from the EPA, both nitrogen and phosphorus discharges to streams and loading to the Gulf remain high. Further reducing nutrient deliveries to the Gulf would require some combination of additional conservation practices on working lands, nutrient filtering practices (such as wetlands and buffers), shifts in crop mix and production practices used, and reductions in cropland area. ERS researchers estimated the mix of conservation practices and management changes across the MARB that would reduce nitrogen and phosphorus loads from agriculture to the Gulf of Mexico by at least 45 percent at the lowest total cost to producers and consumers. The analysis uses CEAP data on costs and effectiveness of conservation practices to explore the potential for achieving additional nutrient reductions through expanded application of cover crops, nutrient management, drainage water management, restored wetlands, riparian buffers, and erosion controls as well as changes in production patterns—such as shifts among crops and crop rotations and movement between dryland and irrigated production. The results provide information that could inform the design of cost-effective incentive programs for achieving hypoxia-reduction goals.

ERS researchers found that the least-cost solution for reducing nutrient deliveries to the Gulf would entail implementing a large share of the nutrient-reducing practices and cropping changes in the Lower Mississippi sub-basin. Almost half of nitrogen (44 percent) and phosphorus (46 percent) reductions at the Gulf in the least-cost-scenario would come from actions taken in the Lower Mississippi. 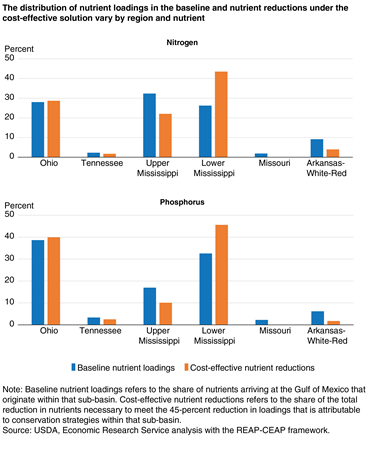 The most cost-effective practice for reducing nutrient loads to the Gulf would generally be optimally placed wetland restoration, especially in the Lower Mississippi and Tennessee sub-basins. Buffers would also generally be more cost effective than on-field practices because they treat nutrient loss from expanded treatment areas. However, the terrain within the MARB offers limited opportunities for buffer and optimal wetland placement. Drainage water management, nutrient management, and cover crops (when used with structural erosion controls) were also generally more cost effective than the other practices and combined practices explored. The lowest per-unit nutrient loading reduction costs generally would occur in the Lower Mississippi, Tennessee, and Ohio sub-basins—followed by the Upper Mississippi and, more distantly, the Missouri and Arkansas-White-Red sub-basins. 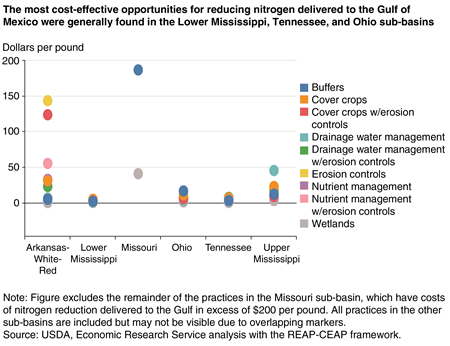 The changes in crop production practices and idling of cropland to meet a 45-percent nutrient-reduction goal across the MARB would result in a decline in crop production for several major crops. Corn, soybean, and wheat acreage in the MARB would decline by 2.0 percent, 5.6 percent, and 3.8 percent, respectively. Resulting production declines would result in crop price increases—with the price of rice estimated to rise 15.8 percent, for example. The Lower Mississippi is the center of rice production nationally and would undergo the greatest amount of change in production, production practices, and land use. By comparison, corn and wheat prices would increase by 4.8 and 4.4 percent, respectively, due to production declines.

The estimated increases in commodity prices would partially offset any increased costs producers face in taking steps to reduce nutrient loss and pass part of the cost to consumers and other users of agricultural products (including livestock producers). Increasing prices would also benefit farmers outside of the MARB, who, in this analysis, were not subject to nutrient-reduction constraints. Aggregated net returns associated with production would increase overall, both within and outside the MARB. Net returns would decline, however, in the Ohio, Tennessee, and Lower Mississippi sub-basins.

The analysis also showed that higher commodity prices would stimulate production in regions not facing nutrient-reduction constraints. Outside the MARB, cropland would expand and the intensity of production on existing cropland would increase. This would, in turn, increase potential nutrient and sediment runoff. For other regions trying to address significant nutrient-related water quality issues, such as the Chesapeake Bay Watershed and Western Lake Erie, an increase in intensity of agricultural production may increase the amount of effort necessary to meet water quality goals in those regions.

Regional water quality goals are not limited to reducing nutrient delivery specifically to the Gulf. Nutrients from cropland affect water resources within the sub-basins as well, harming drinking water sources and recreational lakes throughout the MARB.

To explore the implications of a more distributed approach to achieving Gulf water quality goals, the researchers modeled a scenario where a 45-percent nutrient reduction to the Gulf is achieved by requiring each of 135 production areas within the MARB to reduce nitrogen and phosphorus discharges to local surface waters by 45 percent. Imposing local constraints on nutrient discharges would result in more widespread adoption of nutrient-reduction practices. The acreage allocated to additional nutrient-reduction practices or converted to wetlands or riparian buffers was estimated to more than double under this scenario—from 36.7 million acres to 78.5 million acres. Also, more cropland would be removed from production (25.9 million acres versus 10.4 million acres in the Gulf scenario), with acreage declines distributed more uniformly throughout the MARB.

In the scenario where regional discharges are constrained, extensive changes in management would take place in areas that changed little under the original scenario, which imposed constraints on nutrient arrivals at the Gulf without consideration of where they originated. When regional discharges were constrained, for example, the Upper Mississippi sub-basin accounted for 33 percent of the reduction in nitrogen arrivals at the Gulf, while under the Gulf constraints, that region accounted for only 22 percent of the decline in nitrogen loadings. Since all MARB production regions would reduce nutrient losses by 45 percent under regional constraints, a greater share of reductions would come from upstream sub-basins, and the burden on the Lower Mississippi to supply low-cost nutrient reductions to the Gulf would be reduced.

The total cost of reducing nutrient delivery to the Gulf would increase when reductions are distributed throughout the MARB based on regional constraints rather than allocated to regions based exclusively on cost effectiveness. In this scenario, impacts on production would be greater across the MARB, and economic costs would impact both consumers and producers within the MARB. Net returns within the MARB overall would decline, and prices for all crops except cotton and rice would increase more than when the only goal was reducing nutrient delivery to the Gulf at least cost. The water quality benefits achieved within the Gulf were the same: a 45-percent reduction in nitrogen and phosphorous loadings. However, the wider distribution of nutrient-reduction practices across the sub-basins were also likely to result in a wider distribution of local water quality benefits (estimating those benefits was beyond the scope of this study). In both cases, higher crop prices would drive increased production outside the MARB, with associated increases in nutrient and sediment runoff in those areas.

In cases where one nutrient can be identified as a primary issue in regional water quality problems, water quality programs may also choose to focus on reduction of a single nutrient, rather than controlling nitrogen and phosphorus jointly. Additional analysis explored the implications for nutrient loadings of providing incentives for farmers to reduce either nitrogen or phosphorus, but not both. While the analysis revealed some complementarity between the two—where efforts to reduce one nutrient tend to also reduce the other—the effect varied widely by region and was generally stronger when nitrogen was the targeted nutrient.

Given the size of the MARB and the diversity in crops, cropping practices, resource base, and climate, this research suggests that no single “silver bullet” solution can adequately address the nutrient issue. Further reductions in nutrient loadings originating within the MARB are likely to entail a broad portfolio of mitigation strategies. Some nutrient-reduction strategies, such as optimally placed wetlands and buffers, were found to generally be more cost effective than others within a given sub-basin.

However, the cost-effectiveness of different practices varies according to local and regional conditions, as well as with pre-existing conservation practices—since the extent to which low-cost nutrient-reduction strategies have already been identified and implemented varies. Incentivizing additional practices in those areas where they are most cost effective, and at the appropriate level, requires additional technical assessments and supporting data to identify cost-effective combinations of practices based on local conditions, as well as the flexibility to customize incentive systems based on those findings. Overall, this analysis suggests that regions that are most hydrologically connected to the Gulf and that have been identified as having high potential for additional nutrient reductions—such as the Lower Mississippi, Ohio, and Tennessee sub-basins—are more able to produce reductions in delivered nutrients at low cost.