ERS researchers examined a set of manufacturing plants that were surveyed in 1996 and again in 2013. The 2013 survey included questions on whether the establishment had introduced new or significantly improved products, processes, marketing methods, or logistics processes as well as additional questions aimed at detecting the level of innovation. Non-innovators were identified as businesses that did not indicate existence of a continuous improvement program in 2013. At the other end of the spectrum, far-ranging (“substantive”) innovators had embarked on continuous improvement programs, but they also protected intellectual property, experienced innovation capital constraints, and recognized failed innovation projects—behaviors believed to characterize innovators substantially reconfiguring or redesigning products and processes. Incremental innovators fall between those two categories. These establishments tended to make improvements, but improvement efforts were relatively limited.

This raises the question of whether manufacturing plants classified as more far-ranging innovators in 1996 were more likely to survive relative to non-innovators and incremental innovators. Researchers examined this question with a focus on the survival of standalone, or single-unit, firms—rather than those that are branch plants. In a multi-unit firm including a number of separate business locations, the degree of innovation within each branch plant might differ from that of the company as a whole. This makes it difficult to reliably classify the innovation of these plants.

The steep decline in the survival rate of non-innovators prior to 2004 was due in part to trade policy changes for textile and apparel industries, which may have protected less competitive plants. The similarly fast rate of exit for more far-ranging innovators over the same period stemmed partly from the 2001 recession, which impacted some high-tech sectors severely. The flattening of all three survival lines since 2005 was likely due to the majority of surviving plants shifting to more far-ranging innovation strategies from their 1996 innovation classification. 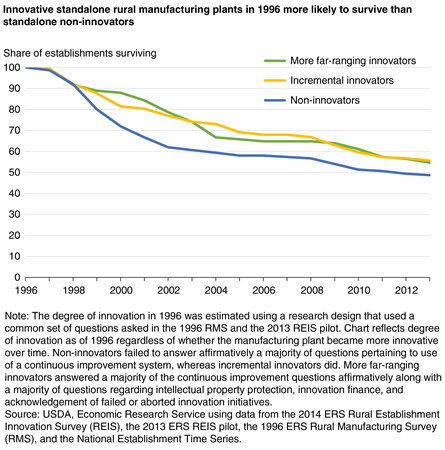 Innovation in the Rural Nonfarm Economy: Its Effect on Job and Earnings Growth, 2010-2014, by Tim Wojan and Timothy Parker, ERS, September 2017